Fantasy Football Commissioner Sends Us His First League Email of the Season, Reminds Us FOOTBALL IS BACK! 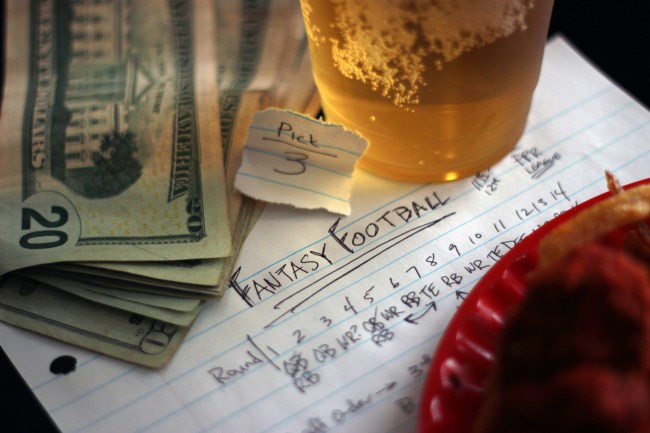 The season is finally here! Almost.

Every year, readers send us emails that were sent from their clinically insane fantasy football commissioners. Being the commish ain’t easy. Well, actually, it is. What’s hard is having shitbag, deadbeat, jerk-off-artist friends who don’t know how to send a fucking check in a timely fucking manner.

Anyway… This year’s first email we’ve received is actually from the commission of a fantasy football league.

Check it out below and if you’ve received or sent a worthy, hate-laced fantasy football email this year, send it to us.

Gentlemen,
It’s your commissioner here. You know, the one who has missed the playoffs the last 2 seasons in his own league. The one who shows strong, undying, biased opinions on anything and everything Redskins football related. The one who probably takes fantasy football too seriously because in some ways, I believe it showcases one’s knowledge and expertise of America’s favorite game. And losing to any of you degenerates makes me sick.

With that said, it’s time to resurrect our league for the upcoming NFL season!

We’re almost past the football headlines of “What does Johnny Football do with rolled up dollar bills?” “Josh Gordon got high again” “What IS that on Cam Thomas’ dick?” “Richard Sherman Speaks” and “Are RGIII & Jay Gruden bros yet?” I’m over it. Just like you, I’m impatiently waiting for September 7th.

We’ve had some solid competition over the past few years. There’s been parody for the most part. Multiple playoff spots have been up for grabs near the end of the season. Eric was our champion last year. Congrats to that small guido motherfucker (kind of)! You can only give so much love to a Giants fan. It’s like calling Eli an elite QB. It just doesn’t feel right, does it? To reward him (late) for his victory, everyone is required to send leftover Taco Bell from the night before via UPS Standard Ground Shipping (5-7 business days). Don’t worry, he’ll still eat it. He has an insatiable appetite for fast food disguised as real food. And remember to include hot sauce.

Let’s give it up for Drew for finishing LAST place with a compelling 2-11 record. Your team name sucked too. Hairyman Foster? What the fuck? Change that shit this year or you’re getting booted faster than Jim Irsay out of rehab.

Greg, after looking how many weeks you missed having a full starting lineup… I’m not sure why you were in this league in the first place. Shape up, or I WILL tell everyone about the time you and Luke double teamed that porky Canadian girl behind the Waffle House. Don’t make me do that. Because it’s still a secret.

Devin, welcome back to America son! You finally get to enjoy grilling, beer and football on Sundays and that’s a good thing. I don’t know what the hell you do in Eastern Europe on Sundays, but I promise that whatever it is, it isn’t better than Sunday Funday.

Fuad, let’s talk about these Ravens. Is there anyone on your team that is NOT on parole right now? Every day it seems like they find a way to top the hoodrat shit that team is known for. Your team makes the Longest Yard look like Youth Group. Next thing you know, they’ll be knocking out cheerleaders on the sideline (there are no elevators for Ray Rice to hide in) and selling drugs to the Cleveland Browns (because apparently there is a solid market there).

Gida, you forest gump motherfucker. Congrats on the DC win last weekend! I hope you bring some of that competitive spirit in the league because every league needs THAT guy who gets way too heated about a debate, who won’t at any costs abandon their stance just to win a pointless debate. Box, check.

Nassar and Manny, I’m sure you all are broing harder than you’ve ever bro’ed before. Nassar is doing his thing casually snapchatting 450 seconds of some shitty EDM show in between work weeks. Manny is now living in Chapel Hill. I don’t know anything about his new girlfriend, but I bet she’s a UNC freshman. Respect. Although you know it’s fishing with dynamite to tell them about your high school wrestling days… bro.

Conor, This is probably reaching you in some dive pub in Boston while you’re sharing a Sam Adams talking about the Red Sox. On a scale of 1 to 10, I’d rather hang myself than join you massholes. Places I’d rather be: The Gaza Strip, Justin Bieber Concert, Malaysia Airlines Flight, New Jersey.

But for real, as a requirement to join the league this year… everyone’s dues go up $20 to pay up for missing last season. I’ll go back and look at the compensation structure to make sure we keep it to the original agreement. Eric is the clear benefactor there. It’s deserved since he won the league after we all agreed to pay before last season.

This year, we pay dues before the season starts. As usual, we’ll negotiate and agree to the point system and new compensation structure. And if I hear Gida make one more unreasonable complaint… I am just going to lose my shit. Thank you for laughing Fuad, Eric, Greg, Luke, Devin, Conor and even Fish. Let us not forget “The Most Unforgivable of Trades” that was supposed to catapult me to the top of the league standings! Greg, as innocent and clueless as he was, still made out better on total points from the trade and we both missed the playoffs. So if my integrity as commissioner comes into question, your argument is baseless and you’re probably a liberal.

1: Actively fill your lineup every week
2. Pay dues
3. Contribute to league discussions
4. Love Football
5. Drink Natty
6. Be Awesome
7. Don’t Suck
8. Show up on Draft Night
9. Talk Shit
10. #76 No excuses, Play like a Champion
I’m already assuming that everyone is in, since this is the most badass league you’ve ever been a part of or ever will be in. Once we have the league members set, I’ll open for debate on how to improve the league this season, and I promise to be more open-minded than I have in the past. Even though most of your ideas are really, really terrible.

Hope everyone is having a great offseason and get ready to go to war!