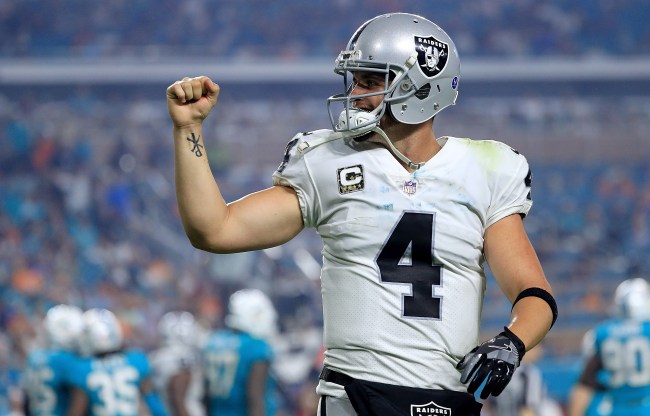 My list this week changed drastically over the last 24 hours as a few fantasy-relevant players were put on the COVID-19 list and are now out this week. We’re also dealing with a lot of impactful players on byes and more out with injuries. Let’s see who you can put in your lineup this week and who to leave on the bench in Week 9.

Jones has steadily improved over the last couple of weeks including back-to-back multiple touchdown games. I like Jones to keep this going this week against Washington which has allowed multiple passing touchdowns in three of its last five games.

Let’s just take Carr’s performance last week as a mulligan, the weather in Cleveland was terrible and there was no offense at all in that game. Let’s look at the fact he has three straight 20+ fantasy point performances and four out of the last five. The Chargers just traded away corner Desmond King and allowed Gardner Minshew and Drew Lock score over 19 points each in the last two weeks.

The value of Newton plummeted in recent weeks, but a decent outing against Buffalo allows him to keep his job. This is a great matchup this week against the Jets who are allowing the second-most passing yards and the third-most passing touchdowns in the league. What I like the most though is the Jets are allowing the ninth-most rushing yards to quarterbacks and have given up two rushing touchdowns, which is where Newton has made his impact.

The Titans have struggled the last two games, Tannehill has played well, but by his early-season standards, he’s struggled. This is a temper your expectations type of game as he faces a Chicago defense that has allowed the fewest touchdowns this year. Chicago is an easier matchup against the run, this could be a heavy Derrick Henry day.

I wasn’t expecting Joe Burrow or Justin Herbert like numbers in Tua’s debut, but I was hoping that if Tua played well, I could say start him this week. That just wasn’t the case with 93 passing yards and a 80.3 QB rating. Keep him on the bench again this week.

In what should have been a prime matchup against the Falcons, it did not get well for Bridgewater, he did miss time with an injury, but still didn’t play well. He gets a much tougher matchup this week against the Chiefs who are allowing just over 15 points-per-game to quarterbacks. With the return of Christian McCaffery, Teddy may be back to game manager status.

One of the reasons I’m starting to like Daniel Jones is because of the return of Shepard. He’s been the leading receiver with 133 receiving yards and 18 targets since he made his comeback. It’s not a great matchup on paper, but neither was Tampa Bay last week and his target share makes him a solid start in PPR.

You have to love the bounce-back of Cooks going into the bye; he had over 13 PPR fantasy points and at least nine targets in three straight games. Look for that to continue this week in Duval County.

If you’re a weekly reader, you know my affection towards Beasley. As a Giants fan, I watched him repeatedly convert on 3rd and shorts when he was in Dallas, and now in Buffalo, my screams for him are of joy. Last week he struggled, but previously he had double-digit PPR finishes in six straight games. Look for him to get back on track this week against the struggling Seattle pass defense.

Moore has gotten a bulk of his yards over the last few weeks on big plays, but this week he faces a Chiefs secondary who does well at stopping that. Kansas City is allowing the third-fewest air yards and second-lowest adjusted yards gained per-pass attempt this season.

Davis has played really well this year, with and without A.J. Brown in the lineup. This is a week though it’s hard to trust him. The Bears have allowed just two touchdowns to wide receivers this year and I think the Titans’ passing offense will struggle in this game.

The Dallas Cowboys offense is bad and they will be deciding between Ben DeNucci and Cooper Rush at quarterback, that’s like your grandma letting you decide which stale hard candy you want from her 40-year-old tin candy dish. I could care less if it was the 2020 Steelers defense, the Steel Curtain, or the lace curtains your cat rips down, they all would stop Dallas.

At 51.8%, Baltimore is the heaviest running team in football. Although this is a tough matchup against Indianapolis, Pittsburgh was even a worse matchup last week and he ran for 113 yards. Dobbins has a volume-based RB2 upside, along with Gus Edwards being a viable flex-start.

This Jags’ run defense is not good at all as they are allowing the fifth-most rushing yards-per-game and the same with fantasy points to the position.

Hasty was the lead back when Tevin Coleman went down and will most likely get that opportunity again this week. This is a prime matchup against the Packers who have allowed the most touchdowns and fantasy points to running backs this year. With a lot of offensive players out this week, they could lean heavily on Hasty to move the ball.

Hey Ronald Jones owners, remember that incredible time when he was a top fantasy running back? Unfortunately just as fast as Christmas music comes at midnight on November 1st, so did his fantasy value. Leonard Fournette has out-snapped Jones 91-48 over the last two weeks and with both teams tough against the run, this will be a Brady vs. Brees shootout.

You drafted Zeke in the top five, expecting him to be a set it and forget it, but just like the way ‘How I Met Your Mother’ ended, we can’t always get what we want (Watch the alternate ending on YouTube to brighten up your day). The entire offense has struggled since Dak Prescott’s season ended, we expected Dallas to rely on Elliott to ignite the Cowboys, but he hasn’t gotten it done. I can’t trust him against this Steelers defense/

Taylor has finished inside the Top 15 just once this season, now with Wilkins seeing 20 carries and possible ankle issue, this running back situation has become a mess. This is not a good week to start any of these running backs against the Ravens defense allowing the fewest points to the position this year.

With over nine PPR points in four of his last five games, Ebron has been a solid starter in a thin tight end pool. I like him this week against this bad Dallas defense.

The Broncos still look to Fant as their best receiving option with over seven targets in three of his last four starts, unfortunately, it hasn’t resulted in big fantasy numbers. He has a great opportunity to turn that around against an Atlanta defense that is allowing the third-highest yards-per-reception to tight ends this season.

If Jordan Reed does not go then Dwelley is the guy. With injuries and COVID issues, the 49ers are depleted of people that play offense. Nick Mullens needs to throw it to someone and we could see whoever starts at the tight end position see a lot of targets.

Big Bob had a much better game last week than the previous two after the monster game in Week 4. It will be tough for him this week against the 49ers who are allowing under five points-per-game and the return of Allen Lazard could cut into his targets.

Burton has become fantasy relevant over the last few weeks with a rushing touchdown in two straight games, in fact, he has just as many rushing touchdowns as Clyde Edwards-Helaire and Lamar Jackson this year. What’s tough is he’s still sharing snaps with Mo Alie-Cox and Jack Doyle, I can’t trust he gets that opportunity to say start him.

Remember back in 2019 when you started any tight end against the Cardinals? You can take that thought down to Old Town Road. Arizona has significantly improved against the tight end, along with Gesicki struggling and Tua’s learning curve, I don’t want him in my lineup this week.