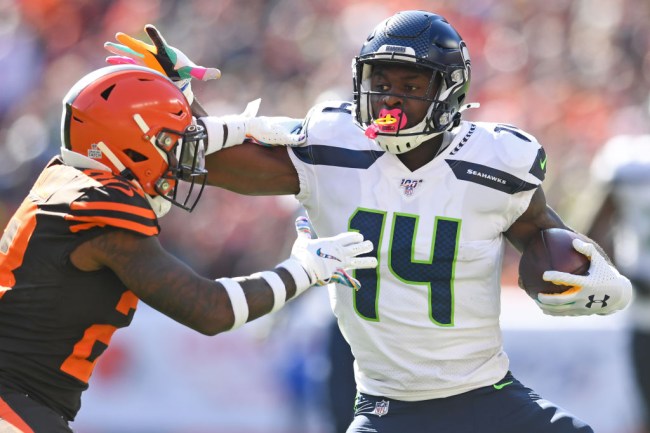 There are some players that can see an increased role with some recent changes. Here are the players you should be looking to target for Week 9 on waivers.

The Seahawks wideout was just behind Tyler Lockett in targets with five this past week. Russell Wilson looked Metcalf’s way in the endzone twice as both of his touchdowns were under four yards.

Seattle will get another great matchup against Tampa Bay next week.

Smith took advantage of Delanie Walker’s absence this week with a 6/78/1 line. He saw some deep balls, and Ryan Tannehill looked for him in the red zone for his touchdown.

With how thin the tight end position is, Smith will be a top option if Walker continues to miss time.

He hasn’t been consistent, but with 19 targets and 90+ receiving yards in the last two games, the slot receiver can be viable in PPR.

With Matt Breida and Jeff Wilson leaving last week’s game with injuries, it was Mostert who filled in.

Tevin Coleman is still going to be the lead back, but with the 49ers being the heaviest running offense, if either Breida and Wilson miss time, Mostert will see an increase in production.

With Mohamed Sanu in New England, Gage saw his biggest production this season and finished with the second-most targets on the team.

This is a team that plays from behind a lot and has to pass. Gage may fill into that number two role in Atlanta.

Fant was another player who saw an increased role after his team traded away a receiver. It didn’t result in big fantasy numbers, but with Emmanuel Sanders in San Fransisco, Fant could see his role increase.

The Cincinnati receiver now has 21 targets and 14 receptions resulting in 234 receiving yards in the last two games. With how pass-heavy this offense is, there are plenty of fantasy points to go around as he, Auden Tate, and Tyler Boyd all had respectable games last week.

Brandin Cooks left the game last week with a concussion, allowing Reynolds to see an increase in snaps.

If Cooks misses some time, Reynold is worth an add.

Conley now has seven receptions for 186 yards over the last two games.

Dede Westbrook left the game early last week with neck and shoulder injuries. If he were to miss some time, Conley would slip into the number two spot behind D.J. Chark.

Goedert has now seen the end zone in back-to-back weeks and is beginning to play a part in this offense, as frustrating that is to Zach Ertz owners.

If you are someone that is still on a journey to find a tight end, he may provide some security.

We assumed with Kerryon Johnson out Ty Johnson was the back to pick up, but it was Carson getting the lead back duties. He out-carried Johnson 12-9 in their win against the Giants.

If you’re a Kerryon owner looking for a temporary handcuff, Carson is the one to grab.