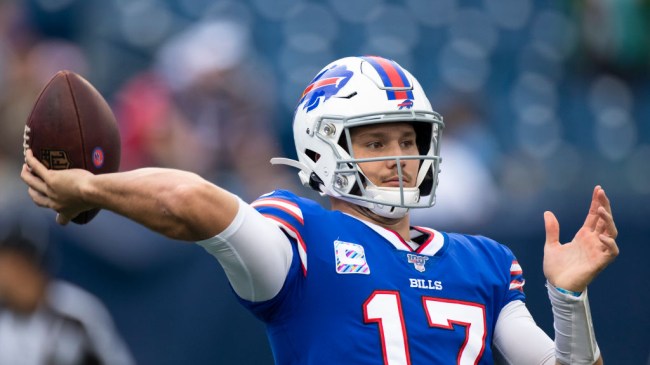 Welcome to Week 8. We only have the Cowboys and Ravens on bye this week, but that means you don’t have the top fantasy producer Lamar Jackson, and weekly starters like Dak Prescott, Mark Ingram, Zeke Elliott, and Mark Andrews.

There are still plenty of great matchups for some top talent and some struggling players that can see a bounce back.

Here are your starts and sits for Week 8.

Quarterback Starts of The Week

Stafford has played well by scoring at least 23 fantasy points in two of his last three games.

This week he has a great matchup against the Giants who are allowing just under 19 fantasy points to quarterback this season and are the fourth-highest in passing yards-per-game.

Kerryon Johnson will miss some time with a knee injury; this could mean more passing opportunities for Stafford.

Allen came off the bye and started where he left off by putting up his second 20+ fantasy point performance this season.

He goes from one great matchup to the next against Philadelphia; they’ve allowed back-to-back 20 point performances to quarterbacks.

Sleeper Quarterback of The Week

Rudolph had two weeks to get comfortable in this offense. As he gets more familiar, he’ll take more chances in the passing game.

He has a perfect opportunity against the misery that is the Dolphins, who have allowed an average of 24.2 fantasy points to quarterbacks.

Quarterback Sits of The Week

I’ve praised Brissett a few times this season; he’s played really well for someone who was going to be the backup.

It’s a tough matchup this week; the Broncos are allowing the third-least amount of points to quarterbacks and haven’t let one QB throw for multiple touchdowns in three consecutive games.

It’s been a peaks and valleys season for Winston. He hit a low point two weeks ago by throwing five interceptions in a loss to the Panthers.

He faces a Titans defense that’s only allowing 14.7 points to quarterback this season.

Bust Quarterback of The Week

It’s been a rollercoaster season for the Browns quarterback, a passing and rushing touchdown saved his performance a couple of weeks ago when he threw three interceptions.

You thought his performance against the 49ers was bad? They were only the second-best defense against the quarterback. The first? A Patriots team that ghosted Sam Darnold to negative fantasy points last week.

Wide Receiver Starts of The Week

Brown enjoyed back-to-back 10+ point full-PPR performances and got into the end zone for the first time since Week 1.

I see him making another trip there this week against the Eagles who have allowed the most touchdowns and receiving yards to wide receivers this season.

We saw Jones have himself a game last week with four touchdowns. He gets back-to-back prime matchups against a Giants secondary who are allowing the fourth-most receiving yards to wide receivers this season.

See this aggression you betta stand down… #BZN11

Sleeper Wide Receiver of The Week

I have not been kind to Davis this year with consistent appearances to the sit column.

This a week where he bounces back; the Buccaneers are allowing just under 30 points-per-game to the position, including a 20 point receiver in four consecutive games.

Wide Receiver Sits of The Week

Jeffery struggled against a Dallas defense who is tied for second in points-per-game to the position. Who are they tied with? The Buffalo Bills.

Wide Receiver Bust of The Week

Running Back Starts of The Week

With Alvin Kamara missing last week, and the Saints having one more game till the bye, they may give him extra time to get healthy.

Murray has a great matchup against Arizona, who has given up over 100 rushing yards in every road game this season, including 153 yards to Christian McCaffrey.

As hard as it is to predict the Patriots offense, it looks like Michel is handling the lead-back duties.

It’s important to follow the status of Rex Burkhead. Whether or not he starts, I still like Michel, but he could steal some snaps.

One thing I do: forgetting what lies behind and straining forward to what lies ahead, I press on toward the goal for the prize of the upward call of God in Christ Jesus. (Philippians 3:13–14 ESV)

Sleeper Running Back of The Week

I said I’d never do this again, but here we go. Bears coach Matt Nagy said after the loss to New Orleans: “I know we need to run the ball more. I’m not an idiot.” I mean, if you look at Monty’s usage this season, we beg to differ.

This is the week, though. The Chargers have given up a rushing touchdown in three consecutive games, and the seventh-most rushing yards-per-game.

Running Back Sits of The Week

Whether or not David Johnson plays, I don’t like Edmonds this week. The Saints run defense is tough; they’ve allowed the eight-fewest rushing yards and have not allowed a 100 rusher since Week 11 of 2017, that’s not a typo, it’s been almost two years.

Even if they get him involved in the passing game, which he’s not known for, New Orleans has not given up a receiving touchdown to a running back this season.

Freeman had the honor of being the lead back last week, which resulted in 67 total yards and a touchdown.

The Colts are stingy to runners by only allowing two rushing touchdowns, the seventh-fewest points to backs.

Bust Running Back of The Week

Henry is the type of back that needs to get into a flow to have an impact; game-script won’t allow that to happen this week.

Tight End Starts of The Week

I like Graham’s involvement in the passing game with a banged-up receiving core. With those injuries, and Aaron Rodgers looking like Aaron Rodgers recently, he’ll continue to be productive.

Everett has emerged into an exclusive club; he’s a tight end we can feel comfortable starting regularly.

He gets a great matchup against an awful Bengals defense.

Sleeper Tight End of The Week

Hill caught all three of his targets and had a touchdown playing in place of the injured Jared Cook last time out.

If Cook is out again this week, Hill gets that prime matchup against Arizona, who are light years beyond bad at defending against tight ends.

Tight End Sits of The Week

You have to lump these guys together because you never know.

Denver is tough against tight ends; they’ve only given up one touchdown, and haven’t allowed a tight end to have over 45 receiving yards since Week 1, this includes someone named Travis Kelce.

The Giants defensive backs are horrendous, but they have a good front defensive line. New York is fourth in points allowed per-game to the tight end. They’ll disrupt Hock enough to keep him in check.

Bust Tight End of The Week

It’s been a rough road for Olsen since those Week 2 and Week 3 performances; he’s only averaging two catches and 19 receiving yards in the last three games.

The 49ers are the second-best defense against the position with allowing just under three points-per-game.