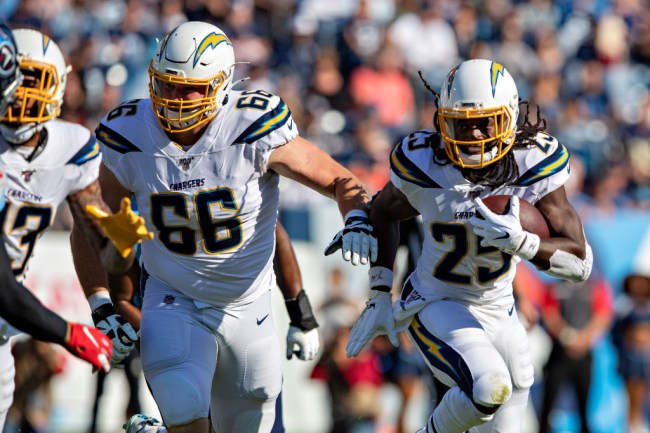 Welcome to Week 9. We saw injuries to some important fantasy players last week, which means you may need to fill in some spots.

The Falcons, Bengals, Rams, and Saints are on a bye, all with players who are weekly starters and with a high need to fill those gaps.

We are beginning the home stretch of the fantasy regular season, games are getting important and playoff spots are starting to lock up.

Here are the starts and sits for Week 9.

Quarterback Starts Of The Week

Stafford has been a reliable fantasy quarterback this year; he has at least 22 fantasy points in four of seven starts and multiple touchdowns in five. He currently ranks QB10 on the season.

He gets an exciting matchup against the Raiders who are giving up an average of over three passing touchdowns-per-game their last four matchups.

Prescott has bounced back from that massive dud he put up against New Orleans with at least 18 fantasy points in three straight games.

He gets the Giants on Monday night who have given up the sixth-most fantasy points to opposing quarterbacks and allowed Prescott to throw for 405 yards and four touchdowns in their Week 1 matchup.

Other Quarterbacks To Start:

Quarterback Sleeper Of The Week

We can say that Jimmy G is not the reason why the 49ers are 8-0. Their defense is allowing the least amount of points-per-game, and with they’re league-leading 57.51 running-play-percentage, they’re 181.1 rushing yards-per-game has them undefeated.

This week, Garoppolo has the opportunity to have a big game; the Cardinals are allowing a league worse 24 points-per-game to the quarterback and third-highest QB rating of 116. I like him as a streamer for this week.

Quarterback Sits Of The Week

It’s been a rough couple of weeks for Wentz as he has hasn’t thrown for over 200 yards or scored over 15 fantasy points.

He doesn’t get a favorable matchup this week as the Bears are allowing the sixth-least amount of fantasy-points-per game to quarterbacks, including under 12 fantasy points to three of their last four.

The Bears defense is excellent at attacking the quarterback; they are second in quarterback hurry percentage and pressure percentage. Wentz is not going to have much time to make anything happen against them.

The Patriots will have their first big test this season as they go on the road to take on the first place Ravens. It’ll be the battle of the two best offenses as these teams rank first and second in points-per-game this year.

This is going to be a defensive battle. The Ravens have the best opportunity to stiffen Brady; Baltimore’s defense has the highest blitz percentage and quarterback knockdowns. Brady always struggles when he gets pressured in the pocket, and if Baltimore can create some turnovers, he can be a bust this week.

Other Quarterbacks To Sit:

Murray is only averaging 162 passing yards and hasn’t thrown or rushed for a touchdown over the last two games.

This is not the matchup he regains any momentum. He gets a scary matchup on Halloween night going up against the 49ers defense that is allowing only 6.1 fantasy-points-per-game this year to quarterbacks, only 108.2 passing-yards-per-game in the last four weeks, and have not allowed a passing touchdown in 39 days.

This game is trending trick more than treat for the rookie QB.

Wide Receiver Starts Of The Week

Gallup had one of his best fantasy performances this season by catching seven passes for 158 receiving yards in Week 1.

Williams came back from a foot injury and had his second game of at least 90 receiving yards and has a touchdown in every game he’s played this year.

The Lions are allowing over an average of 30 fantasy points to receivers in their last four games.

He’s due for a repeat performance.

Other Wide Receivers To Start:

Crowder had 17 targets from Sam Darnold in the first game of the season, in the three games since Darnold’s return, he has 19 total.

This is the week Crowder and Darnold get back to that connection.

Wide Receiver Sits Of The Week

Fitz came out strong to start the season by scoring double-digit points in his first three games; he has faded since with only 20 receiving yards total in the last two games.

He runs into the buzzsaw as the 49ers are allowing the fewest total fantasy points to slot receivers this year.

After Weeks 5 and 6, it looked like Williams was going to be a dependable player with back-to-back 10+ target games, but as the Chargers offense struggles, Williams’ value drops.

Even with a change at offensive coordinator, the Chargers and Williams will continue to struggle; Green Bay is allowing the eight-least amount of fantasy points to wide receivers this year.

Other Wide Receivers To Sit:

You’re always intrigued when you see a star player getting a revenge game against his old team; they seem to have big games.

I don’t see that this week. Jeffery only had a total of six receptions for 102 yards against the third-best defense to wide receivers (Buffalo Bills), and the fifth-best (Dallas Cowboys).

Running Back Starts Of The Week

It felt so good to put Monty in as my sleeper and to see him finally flourish. He had a career-high 27 carries and 147 total yards last week against the Chargers.

If he continues to see that kind of volume, I like him against the Eagles. Philadelphia has allowed an average of 18.8 carries and 17.7 fantasy points over the last five weeks.

We have another revenge matchup in the Eagles/Bears game, this matchup I like better. Howard saw his first game with 20+ carries as an Eagle resulting in 111 total yards.

The Bears are allowing an average of 20 fantasy points to running backs, including over 27 points recently to Latavius Murray and Josh Jacobs.

Other Running Backs To Start:

A year ago I could never imagine putting someone with the talent like Gordon as a sleeper, but with how the carries have been divided between him and Austin Ekeler, he’s not a guarantee fantasy stud.

His pure running back skills will be the factor as the Packers are allowing the sixth-most rushing yards this year and 4.8 yards-per-carry. Green Bay is much better at defending pass-catching running backs by allowing only one receiving touchdown.

With that information, Gordon will be more involved in the game script than Ekeler.

Running Back Sits Of The Week

Carson has been a reliable runner for the past few weeks by scoring at least 15 fantasy points in four weeks.

I’d be very reluctant to start him this week as the Bucs are one of the best run defenses in the league by allowing the lowest rushing yards-per-attempt and the least amount of first downs to running backs. Secondly, they shut down Derrick Henry last week and kept Christian McCaffrey to only 57 total yards in the game before.

We knew after Mark Walton was getting the start in Miami that it was only a matter of time before Drake would find a new team.

With David Johnson’s injury more severe than we first expected and with Chase Edmonds leaving last week with an injury, Drake could see the bulk of the carries.

It’ll be tough for him to get accumulated on a short week, and against a 49ers defense who are second in points-per-game to running backs and has allowed the position to score only one touchdown this year.

In fact, Drake faces the Buccaneers next week, followed by the 49ers again before the bye. By that time, Johnson and Edmonds should be back in the lineup. I don’t think Drake is worth a roster spot.

Other Running Backs To Sit:

The Patriots’ defense is tough against the pass, tough against the run, just tough. You may be thinking, “But Nick Chubb rushed for 134 yards last week?” Chubb also had two fumbles, and he doesn’t have a talented, mobile quarterback like Lamar Jackson.

Jackson is going to be doing most of the work with his arms and legs in this game, leaving Ingram with little opportunity to make an impact.

Tight End Starts Of The Week

Hock owners are frustrated after what has transpired since his Week 1 breakout. Since then, he’s gone for 30 yards once and has one game over five fantasy points.

He gets the opportunity for a bounce-back this week against the Raiders who are allowing the third-most amount of points to the position and the second-most touchdowns.

Work is all we know. Back to it. #onepride

The Seahawks are allowing over 10 points-per-game to tight ends. If O.J. Howard misses another game Brate is a viable streaming option.

Sleeper Tight End Of The Week

The Seahawks are looking for a replacement after Will Dissly ended his season with a torn achillies. Hollister had more targets than Luke Wilson, so, for now, we can say he has the job.

He gets an opportunity against Tampa Bay, who are allowing the second-most points to the position while allowing Jonnu Smith to have a breakout game last week and Jared Cook to have his first double-digit game three weeks prior.

Tight End Sits Of The Week

His lingering foot injury has kept him off the field as he’s just shy of playing 48% of the offensive snaps. He’s also coming off one of his worse games as he had his second-lowest amount of reception yards, and he dropped three easy passes.

The bye may have helped him get healthy, but he gets a tough matchup; New England has allowed the least amount of receptions to tight ends while only allowing 3.6 fantasy points-per-game to the position.

Fant saw a season-high in targets and receptions last week, but it only resulted in 26 yards.

The Browns are only allowing 36.5 yards-per-game to tight ends, fifth best, and with Brandon Allen getting the start, the outcome will not be good this week.

What happened to Jimmy Graham? Ever since he wanted that “wide receiver money” he’s barely been worth tight end money.

Even with most of the Packers’ receiving core injured, he’s still an afterthought in this offense. It’s tough to trust him even with the horrible landscape of available tight ends