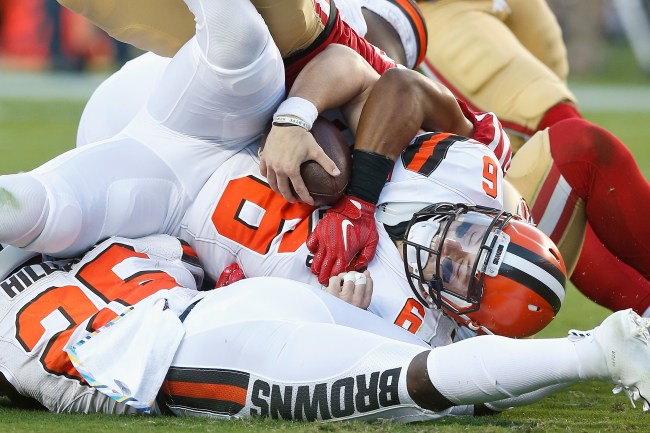 Baker Mayfield, a quarterback who has the luxury of throwing to Pro Bowl receivers, played his worst professional football game yet in last night’s embarrassing 31-3 loss to the 49ers.

If you feel bad for one second about Baker’s dogshit start to the season, consider how he’s hurt his poor fantasy owners. Last night, Baker redefined rock bottom, scoring NEGATIVE fantasy points no thanks to three turnovers.

Look no further, I have officially experienced the WORST loss in fantasy football history.

Up by 1.3 with Baker left. He had no one. Baker gives me NEGATIVE 2 🤬🤬🤬@MatthewBerryTMR @FieldYates #ihatefantasyfootball pic.twitter.com/W9tyVvvZ1F

To add insult to injury.. I need Baker to literally score 0 points to win my fantasy game. pic.twitter.com/Cho48BL5wx

The Jets had 3 QB’s with more fantasy points than Baker Mayfield this week pic.twitter.com/lZXlRP2Bbt

I only need Baker Mayfield to score one point….ONE POINT so I can win this insane fantasy matchup and Idk if he can do it… @j_bakes12 pic.twitter.com/I5dcjf2oQL

So I started Baker tonight and he scored -2 fantasy points. I had no other players playing and my opponent had zero players playing on Monday Night Football. Tried to win the median. Fantasy football is brutal sometimes. @SleeperHQ I had a 100% of winning, what's up with that? 😂 pic.twitter.com/zqoYyEJkvb

I actually lost in fantasy cuz baker shit himself today

Me punting Baker Mayfield off any of my fantasy rosters. pic.twitter.com/8GHntIv3Bo

Things will not get easier for Baker and the Browns. They take on the 4-1 Seahawks before a bye week, then will rev their season back up against the unbeaten Patriots. Gulp.