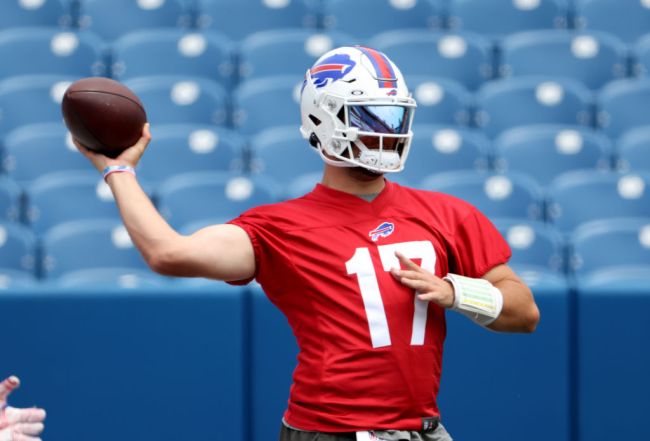 Usually, the news you hear coming out of NFL OTA’s is boring, especially among the teams with an established quarterback, but the Buffalo Bills made an exception on Tuesday.

Defensive end A.J. Epenesa picked off Josh Allen at the line of scrimmage and decided to take the ball all way to the end zone for a pick-six. Offensive lineman Jon Feliciano didn’t like that move all that much, so all 325 lbs of him chased Epenesa down in the endzone. Epenesa proceeded to throw the football at him, which Feliciano responded to that move by throwing punches.

A rare OTA fight broke out. A.J. Epenesa intercepted Josh Allen at the line of scrimmage, and returned the ball for a TD. Jon Feliciano chased him down and the two exchanged words before Epenesa fired the ball at Feliciano, who then tossed a punch and a melee ensued. #Bills

Feliciano joined ‘The Pat McAfee Show’ just after the practice session was finished and explained that there’s no ill will between himself and Epenesa.

“Everyone knows around here we’re trying to work,” Feliciano said. “There’s no animosity between me and AJ. That crap was done right when we walked off the field. Iron sharpens iron and I’m trying to get him better.”

"That crap's done right when we walked off the field.. But Iron sharpens iron & trying to get him better" #PatMcAfeeShowLIVE pic.twitter.com/n5H2fqf7BW

It certainly sounds like it was just two dudes taking pride in their craft trying to send a message to their respective sides of the field, which when that happens at practice, yeah, some words and fists are bound to fly.