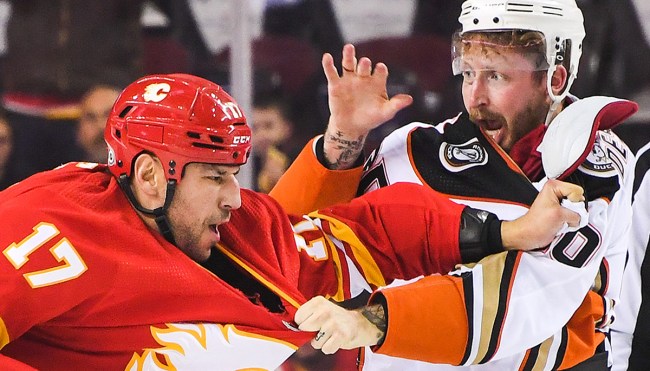 Rodney Dangerfield is widely credited with spawning the evergreen joke about one of the more unique aspects of ice hockey when he joked “I went to a fight the other night and a hockey game broke out,” a quip that will surely resonate with anyone who remembers watching players drop the gloves for the first time and thinking, “Wait, they can do that?”

The first documented hockey fight took place on a rink in Ontario all the way back in 1890, and donnybrooks have remained a fairly integral aspect of the sport since then. In 1922, the NHL introduced the automatic five-minute fighting major, and while the league has occasionally updated the section of the rulebook dedicated to fisticuffs, they remain a staple of the game to this day.

The go-to explanation to explain the presence of fighting in hockey concerns the argument that players have an incentive to avoid dangerous and dirty plays with a potential for injury if they know there’s a chance they’ll face some vigilante justice for violating The Code in the form of a flurry of punches to the face.

However, it’s also a fairly controversial topic considering the short and long-term impact of the injuries those brawls can cause, as they have the potential to make an already risky contact sport even more dangerous (some people maintain Rick DiPietro’s career effectively ended after he had his jaw broken by Brent Johnson in a goalie fight).

The days when players were given a roster spot primarily due to their role as an enforcer may be behind us, but the lingering and traumatic effects of that bygone era are also fairly well-documented.

It’s safe to assume many hockey fans operate under the assumption that there’s some basis to the utilitarian stance the NHL harnesses when it comes to justifying fighting, but based on new evidence, the idea that violence is a useful tool to prevent more severe incidents may not be based in reality.

That was the focus of a paper that was recently published by PLOS One and authored by Michael Betz, who played goalie for Ohio State in the early 2000s and pursued a short-lived pro career before embarking on a new chapter in his life.

Betz took a look at every penalty assessed in an NHL game between 2010 and 2019 and came up with a mathematical system that allowed him to figure out if there was any credence to the notion of self-policing in the league. After isolating “violent” penalties like boarding, roughing, charging, and, of course, fighting, he discovered the only correlation was that they increased the level of violence (he also noted violence across the NHL has fallen as the enforcer role has been gradually phased out).

At the end of the day, it’s unlikely fighting in hockey is going anywhere at any point in the near future, but given the potential repercussions, you do have to wonder if it will be subjected to even more scrutiny if the very foundation it’s built on crumbles thanks to research like this.