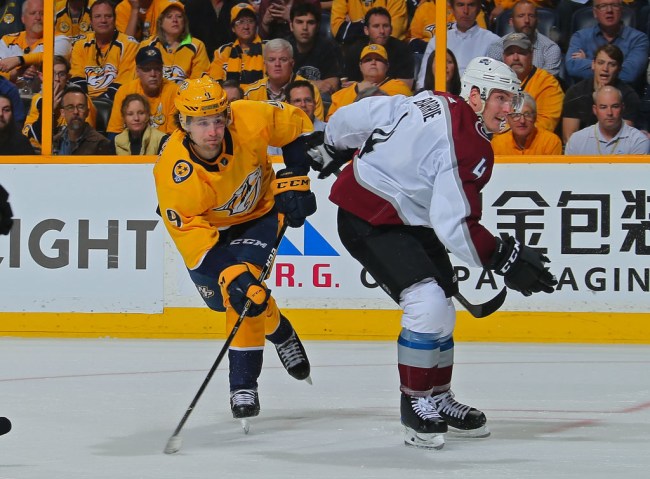 If you didn’t watch the Nashville Predators vs. the Colorado Avalanche game last night and only looked at the final score you’d be misled. The Preds won 5-2 in their first game of the 2018 Stanley Cup Playoffs but the Predators were trailing 1-0 and 2-1 for a decent chunk of the game, and things were locked at 2-2 for a while before Nashville fired off a flurry of scoring in the 3rd period.

Right Winger Filip Forsberg scored Nashville’s third goal of the night, the one that finally put them ahead of Colorado (3-2) and this goal is one of the most soul-crushing moves you’re ever going to see. If this isn’t already the #1 play on the SportsCenter Top 10 I’d be shocked.

He goes between his own legs, around the defender, and nothing but net:

If you’re Colorado defenseman Samuel Girard how do you not just get on a plane and fly back to Colorado right then and there, same goes for the goalie. Mentally, there’s no recovering from that. Filip Forsberg just stuck his hand down your throat and ripped out your soul by going between his own legs around you, and around the goalie. The single-handedly broke down all of the defense you tirelessly train for in practice and it was the go-ahead goal.