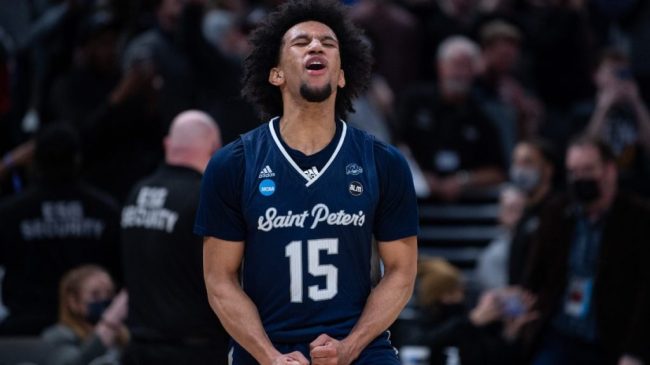 The Cinderella story continues for at least one more night.

Saint Peter’s will look to keep its improbably NCAA Tournament run alive when they take on North Carolina in the Elite Eight. The Peacocks have stolen America’s hearts and they’ll now try to become the first 15-seed to ever advance to the Final Four.

The Tar Heels stand in the way of that.

Saint Peter’s has already bested Kentucky, Murray State, and Purdue to make it this far. Now, they’ll have to get through one of college basketball’s most historic programs.

While many will be rooting for the Tar Heels to advance to set up a Final Four meeting between UNC and Duke, a large portion of college basketball fans will be hoping for another March Madness upset.

And there may be no one pulling harder for the Peacocks than this bettor.

St. Peter's and Kansas away from cashing this region winner parlay 👀

Someone has correctly predicted the first three Final Four candidates, picking Villanova, Duke, and Kansas to advance. The Wildcats and Blue Devils won Elite Eight matchups on Saturday while the Jayhawks took down Miami on Sunday.

The last team needed in order to cash this parlay out? Saint Peter’s.

The $10 wager would pay $14,000 in winnings. This bettor is hoping that midnight doesn’t strike quite yet for this Cinderella squad.

The odds for Duke, Kansas, and Villanova were relatively low compared to Saint Peter’s. All three programs were seeded No. 2 or higher with none exceeding odds of 5-to-1.

The Peacocks, meanwhile, sit at 35/1 on this slip.

North Carolina enters Sunday’s matchup as an 8.5-point favorite. Let’s see if Saint Peter’s can overcome the odds once again to continue their historic run.