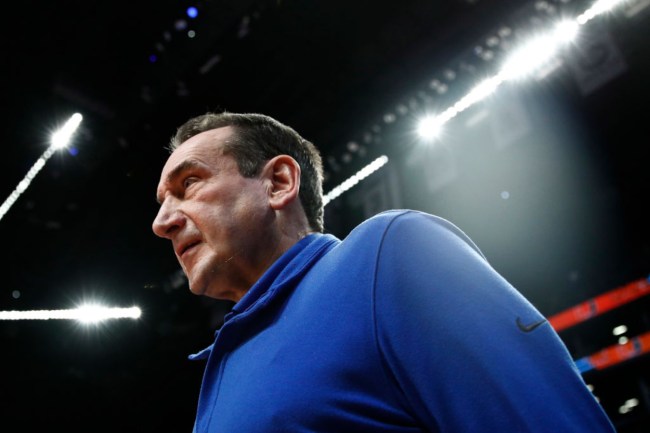 Duke is headed to the Final Four.

A big win over Arkansas in the round of eight has extended Coach K’s last season, keeping the possibility of a national championship alive.

And what better way to get to the title game than going through hated rival North Carolina?

A Duke vs. UNC Final Four matchup didn’t seem likely when NCAA Tournament play first began, but upsets over Baylor and UCLA have the Tar Heels just a game away. The last team standing in the way is 15th-seeded Saint Peter’s.

For those that might have forgotten, North Carolina sent Coach K home with a loss in his last ever game in Cameron Indoor Stadium. I’m sure he’d love to get some revenge in his final Big Dance appearance and end the Tar Heels’ chances of winning a championship.

Coach K was asked about the possibility of meeting the Heels in the Final Four next weekend. Here’s what the legendary coach had to say.

Coach K COOKS a reporter that asked players their preference between UNC and St. Peter’s pic.twitter.com/EyfhsiYnXG

As expected, Coach K evades the question entirely, saying that it will be an honor to play either UNC or Saint Peter’s.

“You know what, it’s going to be an honor for us to go against whoever is the regional champion of that region, and there’s no greater day in college basketball than when those four regional champions, four champions, get under one in one arena and play. It’s the greatest day for college basketball, and we’re honored to be a part of it. We already know Villanova is there. Hopefully (Justin) Moore is not hurt as bad as it looks like he is hurt, and then whoever wins tomorrow, it will be an honor if we ever get a chance to play them.”

Duke and North Carolina have never met in the NCAA Tournament. Having the first ever meeting come in the Final Four in Coach K’s last season would be great for college basketball. We’ll see if the Tar Heels can pull out a win to make that happen.