Five Takeaways from UFC 244: Is Jorge Masvidal the True BMF? 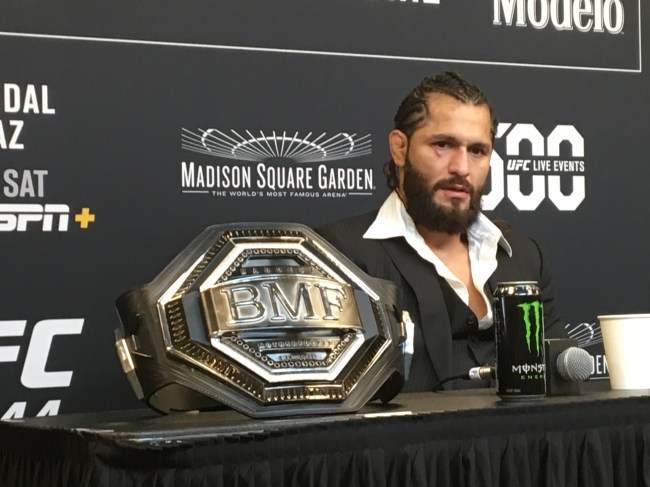 It was a historic night of mixed martial arts as Jorge “Gamebred” Masvidal walked away with the UFC’s inaugural BMF title.

The welterweight from Miami, who was joined by his childhood idol Roberto “Hands of Stone” Duran en route to the Octagon, beat Nate Diaz in the UFC 244 main event. The blockbuster Pay Per View card brought out a massive sellout crowd, including President Donald Trump and Dwayne “The Rock” Johnson, who awarded Masvidal with the belt.

Masvidal looked sharp, dominating Diaz with crisp punches and massive body kicks; however, the fight to determine the UFC’s baddest motherfucker was ultimately stopped by a cageside physician, who called the bout off after the third round due to a cut about Diaz’ right eye. It was an ironic ending to a fight with the BMF moniker.

The win caps off an impressive 2019 campaign for “Gamebred,” who is now a front runner for Fighter of the Year honors. Outside of Masvidal’s win and the controversial doctor stoppage, UFC 244 had a number of massive takeaways, or as Diaz described it “fuckery.”

And, before we start looking forward to the UFC’s next Pay Per View card on December 14, it’s important to review the biggest stories to come out of UFC 244.

Nate Diaz Believes “the F*ckery” is Just About to Begin

One of the biggest stars in mixed martial arts, Diaz essentially willed the BMF title into existence three months ago when he called Masvidal out from the Octagon. The callout laid the framework for one of the biggest fights of 2019, but the doctor stoppage left a sour taste in Diaz’ mouth, as he believes the cageside physician and “The Rock” “played” him. He amounts it to a case of “f*ckery” and is adamant about pursuing a rematch against Masvidal immediately

"I refuse to be quiet about" Masvidal rematch@NateDiaz209's main objective is to run it back #UFC244 (via @bokamotoESPN) pic.twitter.com/SCPEQAuCbn

Colorful commentary aside, Diaz has a point. He has requested a number of rematches during his lengthy career, never receiving one from UFC matchmakers. Additionally, he offered Conor McGregor an immediate rematch after he one their first bout.

At this point, Diaz believes he deserves the Masvidal rematch and politely threatened to sit out until he receives his wish.

Entering UFC 244 on the heels of the first knockout loss of his MMA career, Stephen “Wonderboy” Thompson was “itching at the bit” to get back in the Octagon. He successfully scratched that itch in his Fight of the Night performance against Vicente Luque.

Using the first round to gauge distance and timing, Thompson gained steam as the fight went on, using his punches to set up a dizzying array of kicks and spinning techniques.

Landing with volume and accuracy, Thompson earned the unanimous decision victory. Now he’s looking to make another run at the UFC welterweight title.

It remains unclear when Thompson can return to action, as he badly injured his hand in the fight, but he definitely made a statement that he’s not done yet.

Kevin Lee’s Lands a Knockout for the Highlight Reel

A former UFC lightweight title challenger, Kevin “The Motown Phenom” Lee entered UFC 244 on the heels of two straight losses and was badly in need of a win.

It’s been a rough year for Lee, who returned to lightweight after a failed bid a welterweight. Following that loss, he moved to Montreal to train with Georges St-Pierre and “GSP’s” head coach Firas Zahabi, and the change in camps paid massive dividends.

Facing the undefeated Gregor Gillespie, a former Division-I national champion wrestler, Lee earned a Performance of the Night bonus for his picturesque, highlight-reel knockout. It was a perfectly timed and placed head kick that sent Gillespie crumpling to the canvas.

Back in the win column, Lee is now eyeing a fight with Islam Makhachev, the teammate of UFC lightweight champion Khabib Nurmagomedov.

The knock on UFC light heavyweight Corey Anderson is that he’s not a finisher, but that’s all a thing of the past after he steamrolled through highly-touted prospect Johnny Walker in under one round.

Storming out of the gates, Anderson floored Walker early in the first and never allowed the Brazilian phenom to recover.

It was undoubtedly the best performance of Anderson’s career and a knockout that could finally put him in position for a title shot. However, if Anderson does not receive the next shot at champion Jon Jones, he has now stated that he wants to be released from his UFC contract.

The right hand was on 🎯#UFC244 pic.twitter.com/QZxSoq5H8r