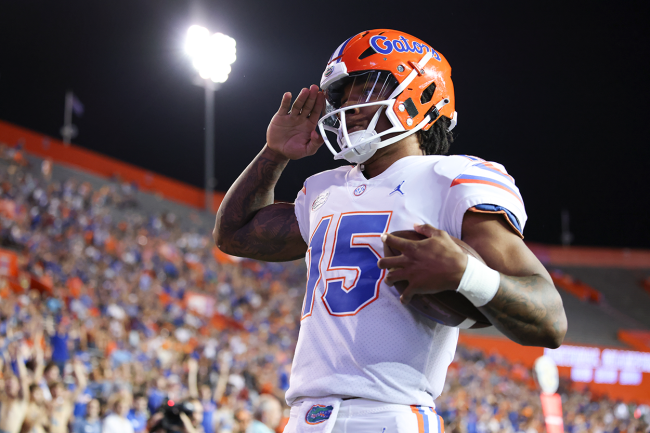 Florida football is in a transitional year. Dan Mullen was fired last fall and Billy Napier was hired during the offseason.

At the forefront of the Florida roster is quarterback Anthony Richardson. As a former four-star recruit in the Class of 2019, there is a lot of hype around the redshirt sophomore.

Richardson saw some time in six games last season and completed 57.9% of his 57 pass attempts for 474 yards and five touchdowns. However, he also threw five interceptions.

Where Richardson really made his mark was not in the passing game, but as a rusher. He carried the ball 40 times for an average of 9.4 yards per carry and three touchdowns.

Despite the fact that Richardson split time with starting quarterback Emory Jones last year, he showed flashes of what he can do. And by all accounts, he is stronger and faster than he was even just six months ago.

Listed at 6-foot-4, 232 pounds on the team’s official roster, Richardson claims that he is actually much bigger than his listed weight. He also revealed his wicked fast 40-yard dash time and sounds like a create-a-player.

Considering his offseason development and his moments of excellence in 2021, Richardson is not getting the respect he deserves as a quarterback in the SEC. He hasn’t given much reason to buy into the hype just yet and has not proved himself as one of the top players at the positon.

As a result, Anthony Richardson is consistently passed over in preseason college football rankings. But that is only fueling his fire.

In a recent picture of Richardson at his locker, he can be seen lounging next to a ranking. It lists Kentucky, South Carolina, Alabama and Mississippi State quarterbacks Will Levis, Spencer Rattler, Bryce Young and Will Rogers as the top-4 quarterbacks in the conference.

The QBs are Bryce Young, Spencer Rattler, Will Rogers, and Will Levis. pic.twitter.com/m4FwzDx1z4

Richardson is nowhere to be found in the ranking. He is using it as motivational bulletin board material, which might not bode well for the rest of the conference.