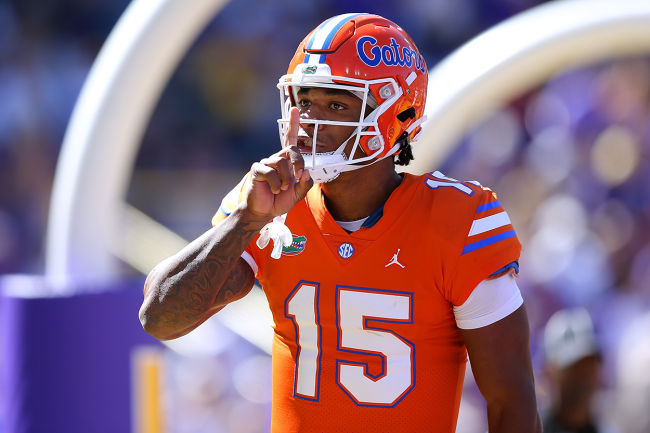 Anthony Richardson is poised to be the starting quarterback for the University of Florida this fall. The Gators are coming off of a 6-7 season that concluded with a bowl loss to Central Florida and are hoping that new head coach Billy Napier can turn things around in his first year.

While eight or nine wins is not unthinkable, it is hard to imagine that Florida will win 10 games in 2022. It is also very possible that Napier’s team could totally flounder this fall and finish at or below .500. A 7-5 season seems about right.

To get to — or exceed — that win total, it will largely rely on Richardson’s ability to lead the offense. He split time with Emory Jones last season and was the definitive No. 2 on the depth chart by more than 275 pass attempts and 90 rushing attempts.

Not this year. Jones transferred to Arizona State and Richardson is the clear QB1.

Listed at 6-foot-4, 232 pounds, Richardson claims that he is actually much bigger. In fact, he recently spoke about his size, speed and arm strength and it bodes well for his success in 2022.

We already know that Richardson is insanely athletic for his size.

However, Richardson’s claims about his current state make him sound like a create-a-player. He spoke with Cole Cubelic at SEC Media Days on Wednesday and said that he is up eight pounds to 240, runs a 40-yard-dash in the 4.4 range and has thrown a football three quarters of the length of a football field.

If this is all true, the former four-star recruit in the Class of 2020 sounds like a beast. It would be hard to imagine taking down a 240-pounder with 4.4-something speed running straight at you and the ability to throw 75 yards certainly opens up the passing game.

Obviously, success is more than just size, speed and strength, and more than just quarterbacks, but Richardson’s current state is a good place to start. He is certainly something to build on and around.