Florida TE Kyle Pitts Put On A Freakish Performance During His Pro Day, Reminding Everyone That He Was Made In A Lab 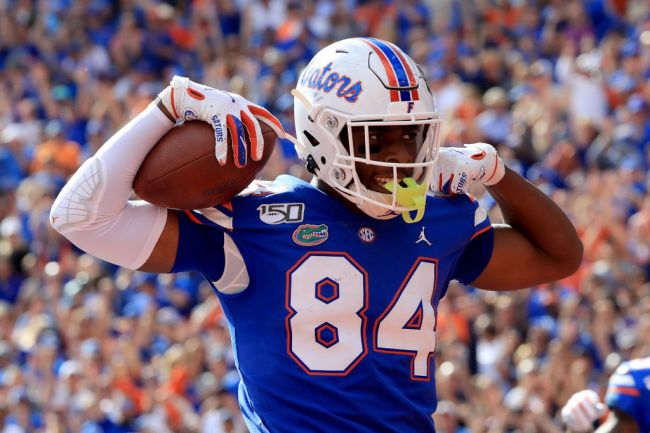 Florida’s Kyle Pitts was named the nation’s top tight end at the end of 2020 and is ranked as high as the second prospect on NFL analysts’ draft boards. He proved just about everything he could on the field during the college football season, recording 43 catches for 770 yards and 12 catches in eight games, and didn’t drop a single pass. The Philadelphia-native is destined to be a dominant receiving threat in multiple spots on the next level.

However, because the NFL doesn’t just let on-field play standalone, players are put through a variety of testing drills to prove their athleticism. There is no NFL Combine this year because of COVID-19 protocols, so the individual team Pro Days are the only times that organizations are able to watch their prospects workout. Pitts and Florida took the field on Wednesday and he absolutely dominated from top to bottom.

From there, he went on to crush the bench press, vertical and broad jumps, and 40-yard dash. He put up 22 reps on the bench and recorded a 33.5″ inch vertical and 10-foot, 9-inch broad jump.

Where he really turned heads was in the spring, when he laid down a 4.440-second 40. At his size, that is absurd. Part of the ridiculous speed, which we have seen across the board at every position during this year’s Pro Days, could be contributed to the fact that all of the times are unofficial and hand-timed. However, these athletes are in the their home environment, on their own terms, and they are not exhausted from a week of interviews, meetings and press. As a result, they’re well-rested and putting down times that are mind-blowing.

Pitts went on to compete in an on-field receiving portion of the afternoon and was moving better than some of the Gators’ corners and receivers. He spent time in the slot, on the end and pushed out to the sideline, and could be used in a variety of different ways in the NFL. Multiple teams were in attendance to watch Florida, but the Broncos, Jaguars and Patriots appeared to have a keen focus on Pitts. Perhaps Bellichick and Josh McDaniels would be interested in having him at X receiver alongside N’Keal Henry?

Pro Days continue through the middle of April, and you can find the full schedule here.