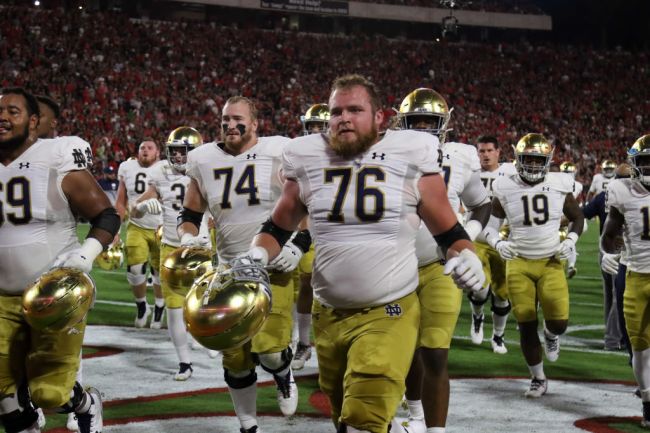 College athletes are finally able to make money off of their name, image, and likeness. Some athletes out there are already cashing major checks, but Florida State offensive lineman Dillan Gibbons is taking a bit of a different approach with the new NIL rule.

Gibbons, who is now an MBA candidate at FSU after playing at Notre Dame as an undergrad, is trying to help out his friend, Timothy Donovan. Gibbons is attempting to raise $30,000 via Go Fund Me so Donovan can enjoy a trip to Tallahassee to watch the season opener on Sept. 5 between the Seminoles and Fighting Irish. Donovan has Charcot-Marie-Tooth disease which damages nerves in the arms and legs, and according to Gibbons, he’s undergone more than 50 surgeries in his life.

All extra funds would go straight to Donovan and his family to help them recover from the financial burden of his recent spinal surgery and continued care.

Donovan is a diehard Notre Dame fan and he and Gibbons became buddies during his time in South Bend. After Gibbons played in his first game for the Fighting Irish, Donovan was wanting to get a player autograph and Gibbons felt that he was “drawn to him.” From that first autograph, the pair looked forward to seeing each other after games.

Funny enough, both were in attendance at the 2008 Syracuse – Notre Dame game, now known as the “snowball game” as the Fighting Irish student section threw snowballs down on its players.

So far Gibbons has been able to raise over $14,000 with over 380 donors making contributions so far.

Here’s to hoping Donovan and his family have an awesome time down in Tallahassee this Fall.