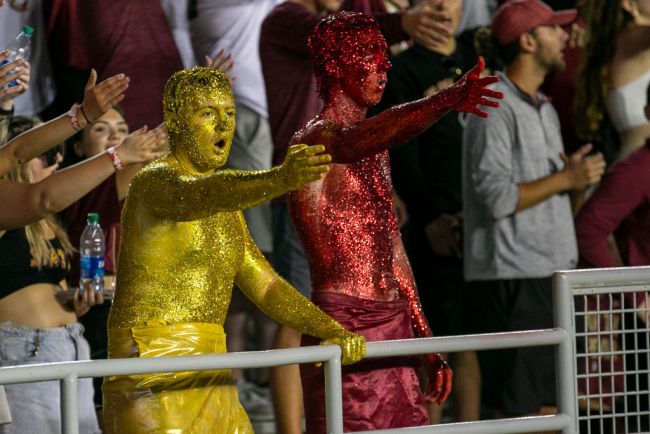 Florida State football is a dumpster fire at the moment. The Seminoles have not had a winning season since 2017 and are off to an 0-3 start in 2021.

This season marks the first time that FSU began a season with three-straight losses since 1976— Bobby Bowden’s first season as coach. To add salt to the wound, the bad losses to FCS program Jacksonville State and Wake Forest came after taking a top-10 Notre Dame team to overtime in Week 1.

After showing their capabilities in the season opener, head coach Mike Norvell’s team has looked virtually lifeless in their last two games. Nobody seems to know how to revitalize the program and everyone is searching for answers…

… except this one fan. “Smooch,” as she is known on Twitter believes that the key to turning the season around is a sex embargo.

She took to social media to cast her plea to young women in Tallahassee, asking them to stop engaging the players in intercourse until they figure out how to play better. She suggests ignoring them and eliminating the “celebrity status” stigma that comes with athletes on campus.

Young women in Tallahassee…pls stop having sex with the FSU football players. When they approach u, act like u don’t know who they are. When they tell u they play for FSU, ask them do they play basketball. When they say football, SAY EW & WALK AWAY. I bet we see a change!

Of course, Smooch’s idea literally can’t hurt. The Seminoles are 0-3 while canoodling around campus, so the worst thing that could happen is, well, they lose again.

In response, one fan decided to double down. While the women avoid active football players, he suggests that the women of Tallahassee turn their attention to giving recruits some late-night loving.

Add to that. Give the recruits All the Coochie! Especially Hunter, McCall and Jones Jr. 3sums 4sums Octasums. Whatever it takes to get this new talent in here. Change is needed!

This is definitely a bad idea, especially considering the age of most high school recruits, but you have to appreciate the innovation. Help the football team secure talent for the future while kicking the current players into shape through abstinence.