Florida State DB Sucker Punches Florida WR In The Head, Somehow Does Not Get Thrown Out 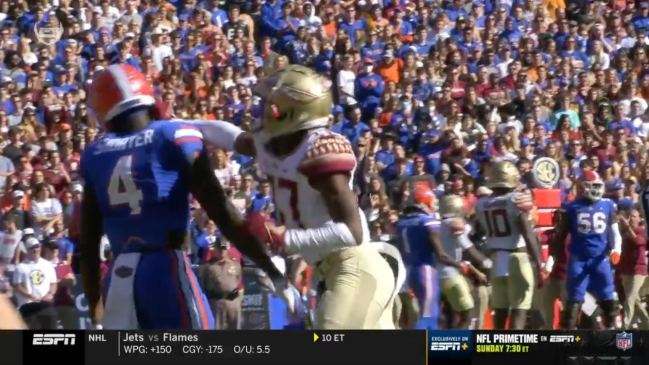 Somehow, some way, Florida State cornerback Omarion Cooper was not ejected from the game. During the second half of Saturday’s rivalry game against Florida, the 6-foot-0 freshman let his frustration get the best of him.

After falling behind on the scoreboard, Cooper was caught throwing a massive sucker punch at Gators wide receiver Justin Shorter. Cooper reared back and lunged forward with an open hand, making direct contact with the head of his opponent.

Shorter did not see it coming and did not react to the petty, unnecessary, very illegal move. As a result, Cooper was penalized.

However, for reasons unknown, Cooper was allowed to stay in the game. In almost any other situation, ever, he would have been ejected and not even allowed to stay on the sideline.

Cooper should have been thrown out of the game. The punch that he threw was after the play, with no logical explanation, and was clearly intentional.

That’s a textbook example of something that gets a player tossed. And yet, he was not.

Here is the punch in question:

Cooper throws a punch at Shorter, but he's still in the game… somehow. FSU-UF is always chippy, but this is weird. pic.twitter.com/kd26khsB93

The winner of Florida vs. Florida State makes a bowl game, the other does not. Tensions are high and that was clear on the field as Cooper swung.