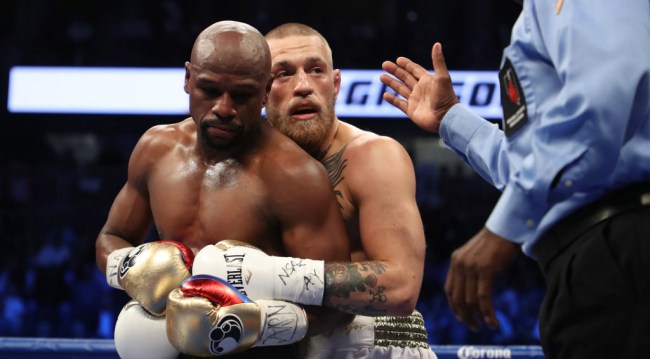 Not sure whether this admission by Floyd Mayweather, Jr. about his “mega fight” with Conor McGregor should make boxing fans angry or if it was already so obvious that it’s just anti-climactic at this point. After all, conspiracy theorists already had a field day with Mayweather’s bet on himself almost being 100 percent accurate.

Regardless, Mayweather is still talking about the fight, because I guess he’s bored after being paid $3 million to visit China, admitting on social media that the fight against McGregor was even easier than it looked, sideswiping Oscar De La Hoya along the way.

“Is he a hypocrite or he back on coke again…that boy still snorting them lines…everybody tried to protest the Mayweather-McGregor fight…I’ma tell y’all the truth…you know I carried McGregor…I made it look good for y’all.”

McGregor has yet to reply to Mayweather’s claims yet, he wants to fight him inside the octagon (not going to happen). Probably because he’s been too bust trading trash talk with the new UFC lightweight champion Max Holloway.

And hanging out with the rich and famous…

Catching hell for it in the process…

If McGregor really is dating Rita Ora I’m setting my Christmas tree on fire. Christmas will be cancelled. 💔

Those pictures of Rita ora and McGregor have me fuming pack of eejits the both of them, men are scumbags and she’s just as bad, bye

Mayweather and McGregor probably should fight again. They were absolutely made for each other.