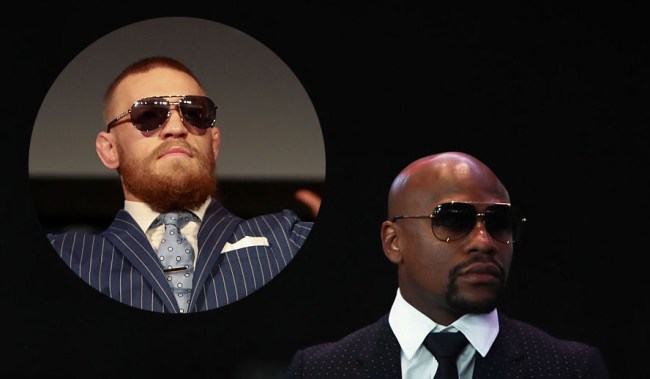 Most people probably believe that the press conferences that Floyd Mayweather and Conor McGregor will be holding leading up to their “megafight” on August 26th will be more entertaining that the actual bout.

There are many good reasons for that too. (1) Have you ever seen a Conor McGregor press conference? (2) People like Sport Science say the fight will be a one-sided affair. And (3) the training videos of the two fighters show a major difference in the two fighters’ boxing skill levels.

So yeah, more people are probably looking forward to seeing what transpires when Floyd Mayweather and Conor McGregor sit down for some verbal sparring as opposed to when they actually get into the ring.

Thursday night the first stop on the Mayweather vs. McGregor World Tour was announced with a date for their first press conference. And if you think I am calling it a World Tour facetiously then just check this out from the ticket site for the presser… 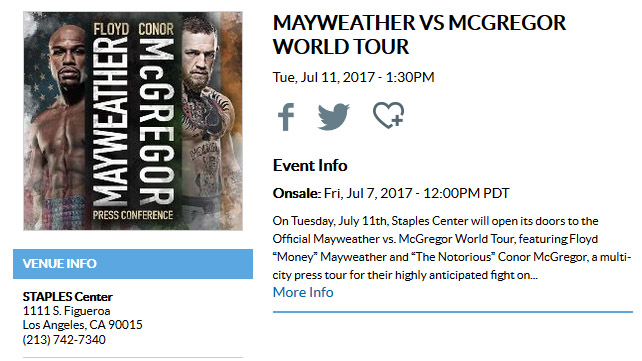 As for the first press conference, it will take place VERY soon at the Staples Center in Los Angeles on July 11th.

On Tuesday, July 11th, Staples Center will open its doors to the Official Mayweather vs. McGregor World Tour, featuring Floyd “Money” Mayweather and “The Notorious” Conor McGregor, a multi-city press tour for their highly anticipated fight on August 26th in Las Vegas, NV and live on Showtime PPV. For more information visit: www.mayweatherpromotions.com. Promoted by Mayweather Promotions, this event is complimentary and open to the public for fans to see the first-ever face-to-face meeting between Mayweather and McGregor. This will be a star-studded event that will feature a live performance and special guests. We invite all fans to come out and be a part of history.

That’s right, it’s free!! Hard to believe they’re leaving so much money on the table for this.

Mayweather and McGregor are also expected to appear in London for a press conference at Wembley Stadium as a part of this tour.

Wembley holds as many as 90,000 people. How many of those seats do you think will be filled when the Mayweather-McGregor show rolls into London? All of them? That’d be my guess.