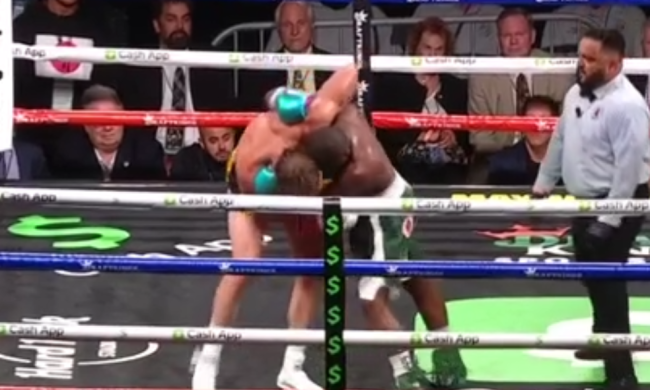 Floyd Mayweather and Logan Paul went the distance on Sunday during their exhibition boxing match but fans are starting to come up with conspiracy theories as to why the fight lasted so long.

After the fight, a video went viral appearing to show Mayweather knocking out Paul on his feet with a right hand at the end of a round. Fans went on to accuse Mayweather of holding up Paul from falling to the ground to prolong the fight.

Floyd Mayweather actually knocked out Logan Paul, but held him up during the fight to carry it through 8 rounds 👀 pic.twitter.com/Y4JSimELIr

The moment Floyd Mayweather Knocked out Logan Paul but held him up so the fight can continue. #FloydMayweather #loganPaulVsmayweather pic.twitter.com/bF0B1POfQh

Let’s be honest if Floyd moves and doesn’t catch him he’s falling on his face.

Some fans questioned the conspiracy theory about Mayweather knocking out Paul and holding him up during the fight.

This was never a knockout, it’s called getting “Buzzed” your legs and body go out for like 2-3 seconds but people recover from it

While many can’t believe that an unseasoned boxer like Paul could hang with one of the greatest boxers of all-time, Mayweather himself gave the Youtuber some props for being strong and tough during the fight.

“He was strong, tough and better than I thought he was. I was surprised by him tonight. That was some good little work.

“Even without much experience, he knew to use his weight to tie me up tonight.

“I had fun tonight. I thank all the fans who came out, you’re all unbelievable.”