Floyd Mayweather Rips NBA Players For Taking Games Off ‘With That Type Of Money If You’re Not Hurt, You Need To Be Out There Playing’ 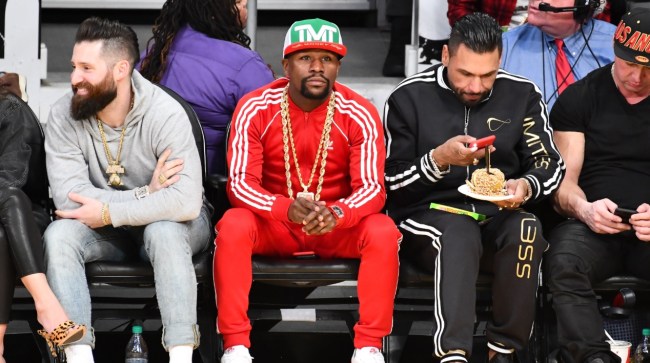 Boxing legend Floyd Mayweather is not a fan of the “load management” phenomena that has taken over the NBA.

For the past few years, players like Kawhi Leonard have decided to play fewer regular-season games to stay fresh and injury-free during the playoffs.

During a recent Q&A Mayweather blasted players who took games off to rest because he felt they were ripping off fans who paid a lot of money to watch NBA players entertain them.

“They will play a couple games and take a couple games off,” “That’s not cool. With that type of money, if you’re not hurt, you need to be out there playing ’cause these people pay a lot of money for the NBA players to entertain.”

Mayweather’s comments received mixed reactions from NBA Twitter with some people agreeing with him and others ripping him for his opinion on load management.

Translation: I’m losing thousands upon thousands of dollars weekly betting on the NBA without knowledge of who’s playing or not https://t.co/iRozZkqbJg

Lol dude was in a sport where you only go to work 1 or 2 times a year https://t.co/R9JlGdnvLs

This is exactly why the @NBA has taken such a step back in the last 15 years. It’s anywhere from $70-300+ per seat to go to a game. Why the hell would I pay that if the stars were buying the jerseys of aren’t playing? This has been Lebron’s NBA. Kobe, MJ, Payton would never. https://t.co/yl9XlzyoQm

theres tens of millions of athletes working on their craft to get to the most notorious leagues – just to collect the check and dress to impress on the sideline https://t.co/Rg6HDAF7gd

He's 100% right. Kobe lived by this. If 82 games is too much for athletes body's, shorten the season. Whatever makes it so there's no more "load management". That's unacceptable.

You're either too hurt to play or you're playing. https://t.co/j9OwtvoaIR

1. They play 82 games + playoffs.They have to make sure that they get there’s.
2. They worked harder than 99.999% of people who pay to go watch them.
3. They don’t get to hand pick their opponents 🤧
4. End goal should be to win the championship, not entertain. https://t.co/DJ6ZHK7K9M