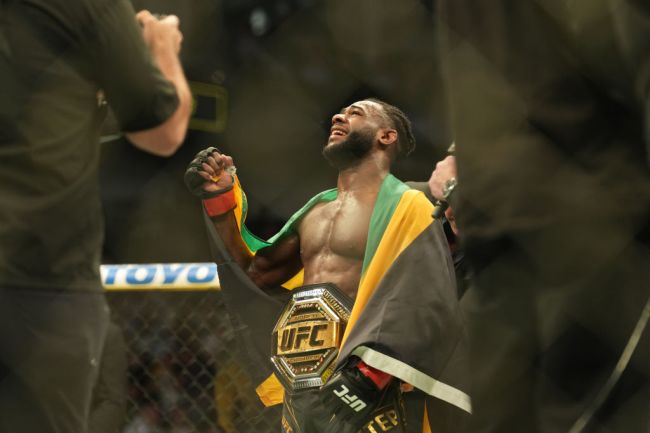 The combat sports world nearly had one of its biggest fights ever 6 years ago and it would seem that none of knew about it until today.

According to Aljamain Sterling, he was out with a girl one night when Floyd Mayweather sent a guy over to invite them to hang out with Floyd. Sterling says this would not have actually been the case and Floyd would’ve then tried to separate him and his girl. Sterling turned down the offer.

Then Floyd sent over a woman to talk to them. Sterling remained unconvinced and told Floyd’s friends to let him know that if he wanted, the two undefeated fighters could find out right then and there which was better between boxing and MMA. Sterling doesn’t believe that message ever got back to Floyd.

Sterling told the story on the “Spinnin Backfist” podcast today.

Money Mayweather was trying to act like Mr. Steal Your Girl and @funkmasterMMA was having none of it.

Had this scrap actually occurred, it likely would have finally ended the debate between boxing and MMA once boxing fans saw what it looked like when their GOAT couldn’t defend a takedown.

Floyd would eventually go on to fight a UFC opponent when he took on Conor McGregor in a boxing match 5 years ago. He would win that fight with relative ease and still maintains that all-important “0” next to his name.

Sterling has suffered a few losses since, dropping a pair of split decisions and suffering a highlight reel knockout against Marlon Moraes. However, he now holds the UFC’s Bantamweight title and recently defended the belt for the first time in a split decision win over Petr Yan.

Let this story be a lesson to you, folks, if you’re ever out and about and see Aljamain Sterling with his fiancee, don’t try and steal his girl. It won’t end well for you.