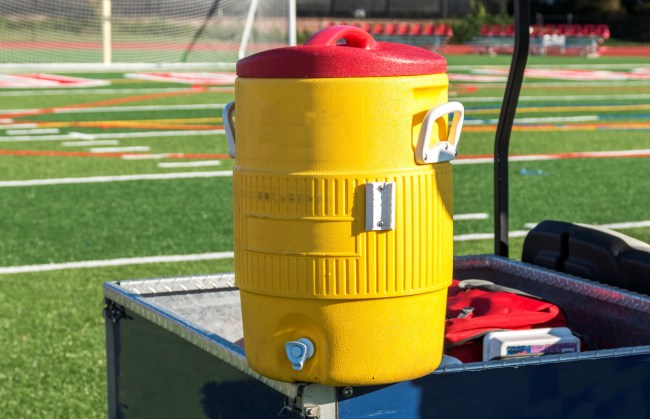 On Saturday, we were treated to one of the better college football games in recent memory thanks to Texas A&M and LSU, who needed seven overtimes to decide an absolutely insane contest that ended with the Aggies walking away with a 74-72 victory.

However, in order to bring us some free football, A&M had to pull off a last-second miracle to tie the matchup shortly after LSU coach Ed Orgeron was treated to a refreshing Gatorade bath after his team assumed they had sealed the game.

Ed Orgeron got a gatorade bath after LSU thought they had a game-ending INT! 😂😂😂😂 pic.twitter.com/D0AR6yHYVE

Considering the circumstances, that should have been the most disastrous Gatorade bath of the week, but thanks to a high school football team in Kansas the title might not be so undisputed.

Over the weekend, the St. Thomas Aquinas Saints took home the Class 5A state championship for the first time in school history so it was only natural the players would want to celebrate a little bit.

Of course, there’s no better way to do that than putting your coach at the slight risk of hypothermia so a couple of players made sure to grab a cooler and dump it over the head of Randy Dreiling, the man who’d led them to victory.

Unfortunately for them, Dreiling was not having any of that bullshit.

A photographer at the game captured the moment and it was very clear the coach was not amused.

To say @STAsaints coach Randy Dreiling isn't a fan of the ice bath would be putting it mildly. Have shot high school football for 20 years and have never seen anything like this. Saints win their first state title over Wichita Northwest 49-28. #vkscores. @HK_Barber pic.twitter.com/ZduYx0CVgD

A reporter also shared a clip capturing the incident, and while he didn’t go into full Bobby Knight mode, Dreiling was pretty heated for a guy who’d just had a bunch of ice poured over him.

In fairness, he’s not the only coach who isn’t a huge fan of the tradition, as James Franklin (jokingly) freaked out after getting hit with a bath of his own last year.

Penn State just won the #FiestaBowl and James Franklin looks like he’s ready to hurt somebody after his Gatorade shower 😕 #WhySoSerious pic.twitter.com/BExc2Ush18

They really don’t make football coaches like they used to.