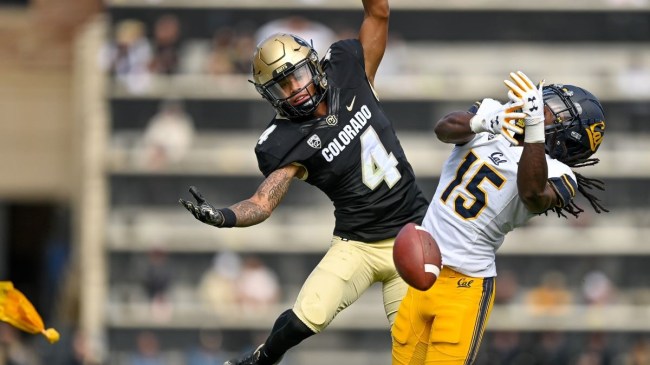 The California Golden Bears football program is perhaps most well-known for executing the most insane game-winning play in history.

In 1982, Cal upended rival Stanford on a last-second kickoff return for a touchdown when the Stanford band rushed the field to celebrate the victory but the play remained live.

The play, coincidentally enough known simply as “The Play,” has lived on in college football history ever since.

But on Saturday, the college football gods finally came calling and the Golden Bears paid penance for their crimes against the gods 40 years ago.

Cal is in its sixth year under coach Justin Wilcox and the Golden Bears have not yet been able to return to the heights they reached under Jeff Tedford in the early 2000s.

Some of that is due to no longer having stud quarterbacks such as Aaron Rodgers and Kyle Bowler. But there’s also plenty of reason to believe that the college football gods just refuse to allow it.

The Golden Bears began the 2022 season 3-2 headed into Saturday’s Pac-12 clash with struggling Colorado. The Buffaloes were 0-5 on the year and recently fired head coach Karl Dorrell.

But rather than pack it in, Colorado showed up in a big way against Cal and took the Golden Bears to overtime tied at 13.

The Buffs needed just three plays to take a 20-13 lead and turn possession over to Cal. On 4th-and-goal from the Colorado 11, Cal QB Jack Plummer dropped back to pass. The rest you’ll just have to see to believe.

Plummer rolls right and finds a wiiiide open Mason Starling. Starling stands there, makes the catch, and is just about to celebrate before Colorado safety Trevor Woods flies in from out of nowhere to swat the ball away.

The refs ruled Starling never possessed the ball fully and the Buffs walked away with their first win of the year while Cal players stood around dumbfounded.

Nobody could believe what they had just seen.

Maybe now the merciful college football gods will call it even.