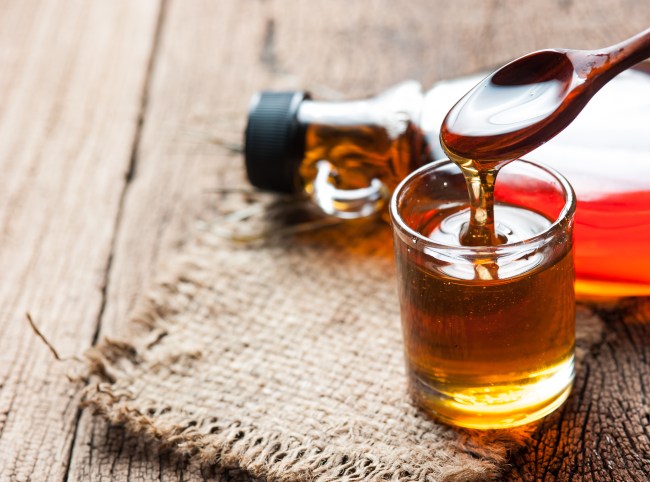 Let me get this off my chest real quick…I hate Miami as much as any college football fan on the planet. I went to FSU at a time when we lost to Miami 5 times in 4 years because they also beat us in a bowl game. But I’ll give them props for the Turnover Chain because it’s flashy in a way that only the ‘Canes can pull off. I respect it. I don’t think other college teams need to go around chasing Miami’s new tradition.

FSU’s lame ass attempt to pull off a ‘turnover backpack‘ was laughably terrible. They could’ve rolled out a Turnover Tomahawk or Turnover Spear and it would’ve been glorious but nah, they debut a Turnover Backpack during a game where they almost lost to an FCS team. Sad.

As for this real maple syrup tradition brewing in Georgia? I fucking love it. Sure, real maple syrup has nothing to do whatsoever with the state of Georgia but who wants to take shots of Georgia Peach syrup? Maple syrup is what you put in pancakes and therefore it’s what the players are taking shots off after pulling off pancake blocks.

Jonesboro (Ga.) offensive line coach Darrian Carmicheal pours actual shots of real maple syrup for his offensive linemen after pancake blocks or touchdowns. The maple syrup doesn’t offer any *real* recovery whatsoever but it does offer a quick jolt of sugar for his players.

My man gives out shots of syrup for pancakes 😂😂🥞🥞 Happy Game day to my high school followers and coaches! pic.twitter.com/OJoGC2py4b

According to USA Today High School Sports, Coach Carmicheal is pouring out shots of Aunt Jemima to his players based on performance because it was a huge hit in practice.

Carmicheal told USA TODAY in an online chat that he first started carrying around a bottle of syrup while an assistant coach at Dekalb County last year. The practice was such a hit that he resurrected it for 2018 in Jonesboro, then decided to kick it up a notch by actually doling out shots of the sticky sweet liquid for monster blocks and touchdowns.

“It was not until pregame (of the season opener),” Carmicheal told USA TODAY. “I said, ‘You know what fellas? We getting syrup shots when we come off the field for pancakes and for touchdowns!’ And it has been a hit ever since.”

More importantly, the syrup shots provide a powerful incentive for linemen to deliver the most impactful plays, in real time. As Carmicheal loves to point out, offensive linemen deserve “their own way to shine.” (via)

Just look at this man and his syrup and tell me that you wouldn’t want to follow him into battle:

The coach told USA Today that he believes these days you need ‘something extra’ when coaching kids to make them ‘go harder’ and he believes that pouring up shots of real maple syrup is the answer. “It makes me happy knowing that they are doing their assignment and having fun doing it!”

Outside of the movie Super Troopers, I’m not sure that I’ve ever seen anyone drink maple syrup in my life. I’m not sure I’d be able to stomach a shot of the stuff while working out. But if it works for his offensive linemen and keeps them motivated then it appears as if this H.S. coach has launched a tradition that can rival Miami’s Turnover Chain.

For more on this story you can click here to read the USA Today article in full.