Survey Of Over 100 Former NBA Players Reveals Who They Think Is The Best Current Player, Coach, And More 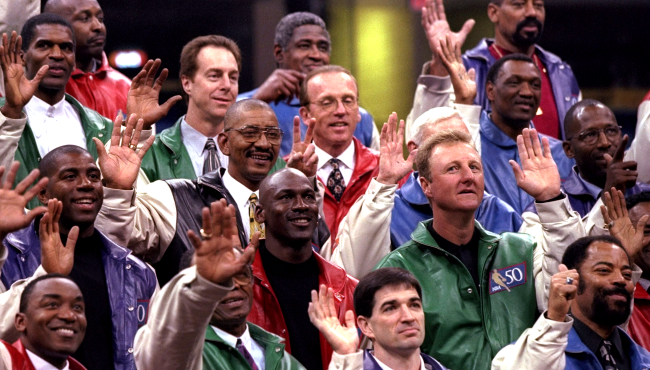 Back in 1996, for the NBA’s 50th anniversary, the league selected who it believed to be the 50 Greatest Players in NBA History.

One has to assume that when the NBA turns 100 years-old in the year 2046 they will do something similar and pick the 100 Greatest Players in NBA History.

But who will be chosen?

To get some idea of that, The Athletic surveyed 118 former NBA players before the start of the 2021-22 NBA season to get their thoughts on the state of today’s game.

1. Who is the best current NBA player?
2. Which current player would you want taking a shot with the game on the line?
3. Five years from now, which current NBA player will be the league’s best player?
4. Which current player do you enjoy watching most?
5. Which current NBA coach would you have most liked to play for?
6. We’re interested to know how the 2020-21 NBA champion Milwaukee Bucks would fare in a hypothetical best-of-seven series against a championship team of the past. Rather than ask you about more than one former champion, we’ve randomly picked one, the 1986-87 Los Angeles Lakers. Which team would win the series, and how many games would it take?
7. 3-point shooting is a bigger part of the NBA than it’s ever been since the 3-point line was introduced beginning with the 1979-80 season. Is the prevalence of the 3-point shot a positive or a negative for the current quality of play?
8. Is the quality of play in the NBA today better or worse than it was during your career?
9. What rule change — either a new rule or a change in emphasis — would you like to see?
10. It’s said the game is far less physical now than it was several decades ago. It’s certainly much less of a low-post game. How would you have fit in with today’s style of play?

By an interestingly large margin, the former NBA players chose Kevin Durant (44.2%) as the best current NBA player. The next two on the list ate up another 45.2 % of the vote (LeBron James with 31.6% and Giannis Antetokounmpo with 13.6%). Stephen Curry was the only other current NBA player to get more than 2% of the responses (3.5%).

Durant, at 48.9%, was also voted the player they want taking a shot with the game on the line. Stephen Curry came in second with 33.2%, while no one else received more than 7%.

Tell us: Who is the best current player in the NBA?

In five years, the former NBA players believe Giannis will be the best player in the league (28.2%). However, the second highest response on the list was “Don’t know” (20.2%). Luka Doncic at 16.4% was the only other player to receive more than 6% of the vote.

4.2% of former players surveyed think Ja Morant will be the league’s best player in five years.

Gregg Popovich (24.1%) and Steve Kerr (20.3%) topped the list of coaches the former players would have most liked to have played for, followed by Doc Rivers at 13.2%.

Let us know: Which current NBA coach would you most like to play for?

The rule changes that they would most like to see enacted were to call traveling/palming, allow more physicality from the defense, crack down on flopping, and bring back hand checking.

And as one might expect, the former NBA players, by a significant margin, said that today’s play in the NBA today is worse than back when they were in the league (41.5% to 30.3%). The rest either voted that it was the same, they weren’t sure, or that it’s “just different.”

Check out the full list of responses to each question, including numerous explanations for many of the choices by the former players, over at TheAthletic.com.