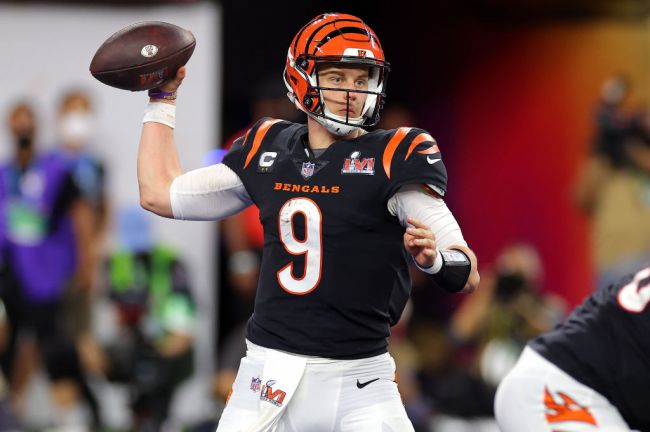 Joe Burrow’s NFL career has gotten off to an incredible start. In just two years, he has already made it to a Super Bowl and established himself as one of the best quarterbacks in football. He has repeatedly shredded defenses and shown he can lead a team and we may not have even seen his best yet.

It seems like there is absolutely no reason to believe Burrow is destined for anything short of greatness in the NFL. However, former NFL GM Bill Polian offered one cause for concern today on Adam Schefter’s podcast.

It’s easy to see why this is something that could concern some people for the trajectory of Joe Burrow’s career. Burrow already tore his ACL in his rookie season. Fans were also given a scare on Sunday when he suffered a knee injury in the Super Bowl. Luckily, that injury reportedly won’t need surgery.

The offensive line is obviously the biggest concern for the Cincinnati Bengals right now. They allowed NFL record numbers of sacks in 2 separate postseason games and could be pointed at as the reason the Bengals didn’t hoist the Lombardi Trophy on Sunday.

Burrow’s situation is eerily similar to Luck’s time in Indianapolis. He was drafted #1 and didn’t take long at all to start putting up big numbers and leading his team deep into the playoffs.

Unfortunately, the Colts never fixed their o-line problems, he was injured repeatedly, and wound up retiring after just 7 seasons.

Hopefully the Cincinnati Bengals fix their line problems quickly because it would be an absolute shame for the football world to lose Joe Burrow the way it lost Andrew Luck.