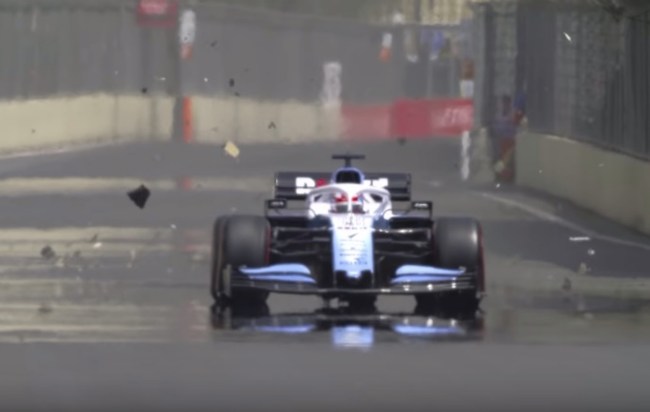 The Formula 1 schedule makes its way to the Baku City Circuit this week in Azerbaijan. Honestly, the only reason I even know that Baku’s in Azerbaijan isn’t because I follow F1 racing closely but it’s because I have a cousin who’s a Formula 1 addict and travels the world to see all of the races a handful of times each year and I remember seeing his photographs from this track a few years back.

Anyway, Formula 1’s in Azerbaijan this week and the first practice on the track experienced an emergency stop after the Williams Racing car got demolished by a rogue manhole cover that popped off the track, hit the car, and sent pieces of the car flying into the air along with sparks.

There was an HD camera zoomed in on the Williams F1 car as it got hit by the manhole cover so we get a really good view of what the damage looked like in slow motion. This is 100% NOT something you ever see on a race track and I wouldn’t be shocked if there will be jobs lost as racing officials try and determine what the heck happened and who is responsible for this.

A look at the incident that brought first practice to a premature end in Baku 👀#AzerbaijanGP 🇦🇿 #F1 pic.twitter.com/VikJY5ts4M

This led to an immediate Red Flag on practice as repairs were needed.

RED FLAG: The session is halted after George Russell encounters trouble with a drain cover and is forced to a standstill

#FP1 will not be restarted. #GR63's car is back in the garage as we begin to assess the damage. #AzerbaijanGP 🇦🇿 pic.twitter.com/qWfPveWiVa

This is unreal! The car was taken out of the race BY THE TRACK.

Owing to the damage caused by the loose drain cover, #GR63's car will require a chassis change and therefore, due to regulations, he will not be able to run until #FP3 tomorrow. #AzerbaijanGP 🇦🇿 pic.twitter.com/Jff27JmeWo

It now appears the recovery truck may have hit the bridge on the way back to the pits. It's spewing what looks like oil or hydraulic fluid all over Russell's car.

Here’s a bit of good news: we’ve checked, and our bridge is going to be OK. pic.twitter.com/75rYbstItN

How do you butt fumble a cleanup effort like that? Get your shit together, Azerbaijan.

🤦‍♂🏗 – "To continue the comedy of errors from this morning…"

The recovery truck that was bringing George Russell's Williams back to the pits collided with a bridge after a loose drain cover caused havoc in this morning's practice session in Baku: https://t.co/fISmlbI1D5 pic.twitter.com/rHYtRKzpFE

I’m sure this is the last way in hell that the race officials imagined this Baku event kicking off. The first practice ending under Red Flag because the track took one of their premier cars/teams/racers out of the event. I’m also curious as to what sort of ramifications there will be for something like this. Do the hosts pay for the costs of the repair? Or is it really a ‘drive at your own risk’ situation out there?

By the way, Baku is where the world record for ‘fastest pit stop’ was set back in 2016 and if you blink you might miss this because it’s that fast:

For more on this, you can click here to check out Formula One’s report from the Azerbaijan Grand Prix.