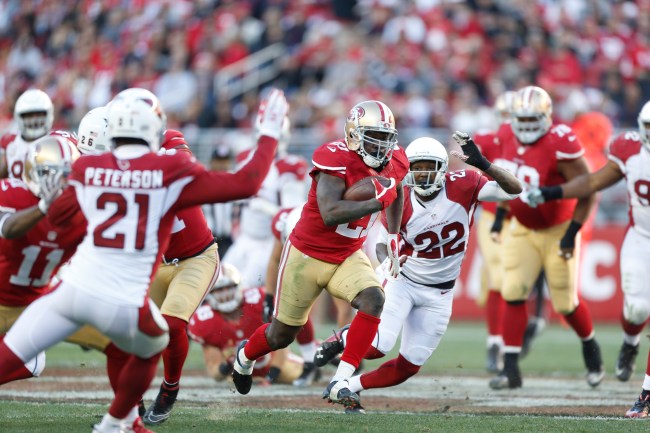 With his boxing debut on the horizon, Frank Gore once again finds himself as a topic of conversation. However, in his most recent interview with TMZ Sports he was more focused on his football career than his upcoming boxing match against Deron Williams

In the interview, he reflected on his 16 year NFL career and discussed his Hall of Fame hopes. According to Gore, not only is he a lock for the Hall of Fame, but if anybody disagrees “they don’t know football”. He says that you can “ask any coach, ask any old player” and they’ll you he belongs in the Hall.

It’s hard to disagree with Gore. The man was the picture of consistency during his NFL tenure, reaching 1000 yards in 9 of his first 13 seasons and only missed that mark by less than 40 yards in 2 of those other years. He also appeared in at least 14 games in 15 of 16 seasons, which is incredible longevity for a running back.

That consistency has put Frank Gore firmly in 3rd place on the all-time rushing list with exactly 16 thousand career rushing yards. Of the other 14 players in the top 15 in this category, 13 are in the Hall of Fame and the other is Adrian Peterson, who should be a first-ballot inductee.

The only knocks against Gore seem to be his lack of an All-Pro appearance and that he has only been to 5 Pro Bowls. Even these arguments don’t hold much weight as LaDainian Tomlinson and Curtis Martin both also made 5 Pro Bowls and Edgerrin James only made 4, but all 3 of them are in the Hall.

There is also a strong argument to be made that Gore should have been selected as a first-team All-Pro in just his second year in the league after averaging a full yard per carry more than Larry Johnson.

Honestly, I think the only argument that should be necessary for Gore is that people think Eli Manning should be inducted in the Hall. If we are living in a world where somewhat above average at quarterback gets you in then 3rd all-time in rushing should remove any doubt that Frank Gore is getting into the Hall of Fame.