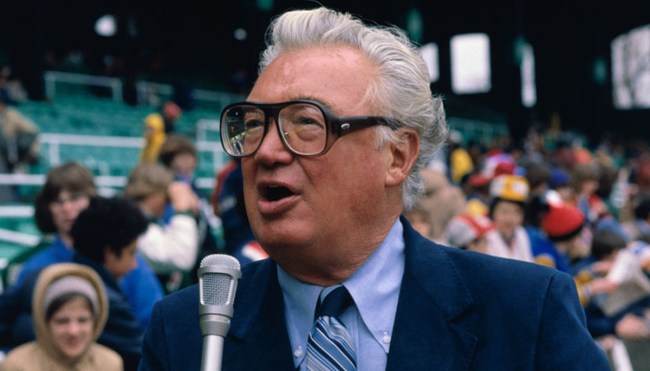 I have a feeling most people reading this likely know Harry Caray as “that crazy guy Will Ferrell impersonated on Saturday Night Live”  as opposed to “the iconic broadcaster who spent more than half of his life traveling around the country to cover baseball games.”

Of course, “Local MLB Broadcaster” is pretty low on the list of occupations that have spawned SNL impressions over the years, and the reason Caray was able to earn what many people would consider a tremendous honor is that he was as beloved as he was eccentric.

Caray was both an infinitely knowledgable and affable personality who took a fairly laidback approach to the game he devoted his life to covering. He’s the kind of guy fans could envision sitting down with to chat about baseball at a bar and one who sounded like he threw a couple of drinks back during his time in the booth—which, based on a number of stories The Athletic recently compiled, is exactly what he did during most games.

That was usually just the start of the marathon drinking sessions that routinely saw him hitting the town until close to sunrise, and a number of people shared some wild stories about what unfolded when they tagged along with him during those nights.

In most cases, you were digging your own grave by trying to keep pace with Caray, but as comedian Tom Dreesen shared while speaking with the outlet, there was one man who was not only able to go drink-for-drink with the broadcaster but ultimately forced him to tap out: Frank Sinatra.

“The night in question came in a booth at The Pump Room inside the Ambassador East. Dreesen was performing with Frank Sinatra at the Chicago Theater, and he had an idea: To pit Harry vs. Sinatra. Who could outdrink who?

Harry got up and said, ‘You win, Frank, I’m going to bed. This is bullshit,’ Dreesen said.; ‘Frank looked at me and winked and said: ‘Amateur.’’”

Imagine being a fly on that wall.