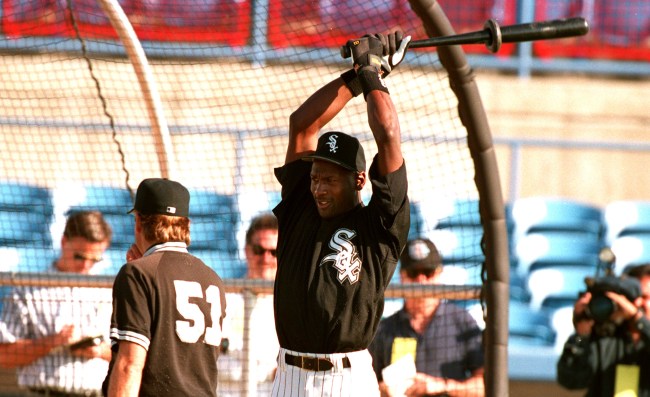 And yet, in 1994, both of them were in the same camp for White Sox Spring Training.

As we saw this week’s episodes of The Last Dance, Michael Jordan seemed to really enjoy his time playing baseball being just “one of the guys” on the team.

Not that those around him ever really thought that of him. They couldn’t, considering the craziness that happened whenever MJ took the field.

“It was a freak show,” Frank Thomas recently explained with a laugh on the White Sox Talk podcast. “It was exciting for the team because we had so many people watching the games every day and so much fanfare, but it was a little crazy. It wasn’t a typical Spring Training. There were a lot of eyes on the White Sox that spring.”

Thomas was asked how distracting the media circus was at that time and replied, “It was a little distracting because people wanted to know if Michael would make the team or not. It was one of those situations where we knew we had a great team, and he wasn’t going to make the team. You can’t just wake up and say ‘I’m going to make it to the big leagues.’ But he came out and worked hard and really gave it his all, but after seeing him for a couple of weeks we knew he wasn’t going to make the big league roster. You gotta tip your cap to him because he worked his butt off and none of us thought he would work as hard as he did.”

Thomas then spoke about how despite Michael Jordan being Michael Jordan he fit right in, taking ribs from teammates, and how they tried to make him feel like one of the guys in the locker room.

However, Thomas added, “It was crazy. I’d never seen so much media in spring training ever. We had as much media as they do at the World Series. That’s how crazy it was. The first week he was there, I’ve never seen so many cameras and people trying to get stories about Michael Jordan playing baseball.”

Thomas talked more about that season and how he came away impressed with Michael Jordan the baseball player.

“He worked hard. He cared,” said The Big Hurt.

Skip to around the 10:30 mark for the full discussion of Thomas talking about being in Spring Training with Michael.