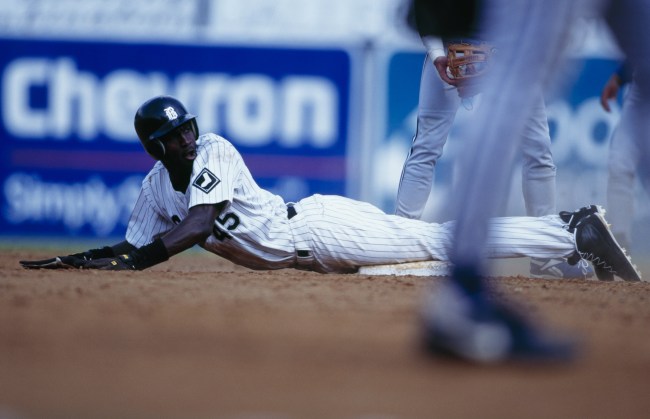 Every time I see a photo or video clip of Michael Jordan in a Birmingham Barons uniform, I get the same feeling I do when I see my eighth grade music teacher at the grocery store. It just doesn’t feel natural.

While Jordan’s 1994 stint in Double-A baseball wasn’t exactly heralded as a smashing success, those affiliated with the Barons organization believed Jordan could have blossomed into a major leaguer given more at-bats.

Mike Barnett, who was the batting coach for the Barons that season, claimed MJ’s hands were “blistered and bleeding” from hitting the cages five times a day, a commitment that Barnett believes would have paid dividends if Jordan hadn’t returned to the hardwood.

Don’t look at his batting average. Look at his 51 RBIs — he was never overwhelmed by the moment. He could fly — look at the 30 stolen bases.

…Two more seasons, he would’ve been a legitimate extra outfielder for the White Sox, maybe even a starter.”

Barnett also told ESPN that Jordan’s intensity was “off the charts,” a sentiment that was supported by an anecdote told by then-Barons manager Terry Francona.

“He had it all,” Francona said one morning during spring training in Goodyear, Arizona. “Ability, aptitude, work ethic. He was always so respectful of what we were doing and considerate of his teammates. Granted, he had a lot to learn. I remember once, we’re up 11-0 against Chattanooga, and Michael doubles. Then he steals third! I’m pantomiming an apology to Pat Kelly, the other manager, and he’s laughing. After Michael comes in, ‘I’m like, ‘What are trying to do, get us killed?’ And he says, ‘Well, in the NBA, when you’re up by 20, you try to go up by 30.’

“I do think with another 1,000 at-bats, he would’ve made it. But there’s something else that people miss about that season. Baseball wasn’t the only thing he picked up. I truly believe that he rediscovered himself, his joy for competition. We made him want to play basketball again.

“And he made me a better manager.”

He then fucked around and won three more titles in a totally different sport.