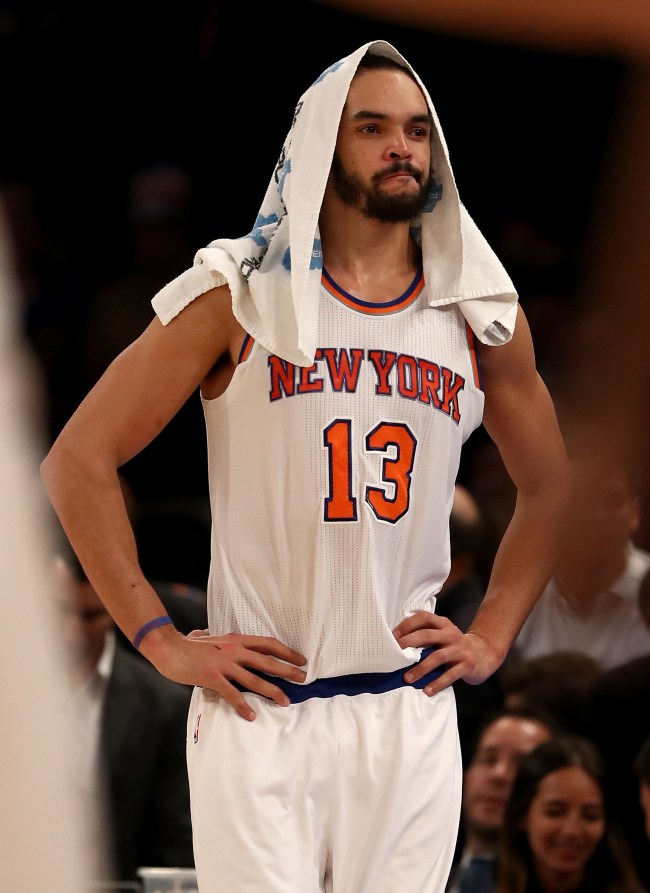 NEW YORK, NY - JANUARY 02: Joakim Noah #13 of the New York Knicks walks off the court after the game against the Orlando Magic at Madison Square Garden on January 2, 2017 in New York City.The Orlando Magic defeated the New York Knicks 115-103. NOTE TO USER: User expressly acknowledges and agrees that, by downloading and or using this Photograph, user is consenting to the terms and conditions of the Getty Images License Agreement (Photo by Elsa/Getty Images)

Reckless spending by NBA teams during the summers of 2016 and 2017 has turned nearly half the league into “sellers”, franchises looking to offload player contracts to remain under the luxury tax threshold next season. Just 5 teams are slated to pay the luxury tax this season (the average since ’12), but that number is expected to jump to 12+ in 2018-2019 (depending on how many teams re-sign their own free-agent players). While there are plenty of sellers, the league lacks buyers capable of taking on these bad contracts; just 7 teams are expected to have $10 million+ to spend this summer, down from 25 in the summer of 2016. The salary cap grew from $63 million in 2014-2015 to $99 million this year, but with it only projected to rise by $2 million in 2018-2019 and so much money already committed to player contracts ($3.02 billion or 99.6% of next season’s cap), this summer’s free-agent class can expect a particularly soft market.

Howie Long-Short: NBA players earn +/- 50% of all basketball-related revenue and are splitting the dollars between just 15 guys, so this isn’t a case of there not being enough money to go around; it’s a case of poor cap management. Money is going to be tight the next 2 summers, so it would be wise for players in those free agent classes to sign one or two year deals. By the time the summer of 2020 rolls around, expect the market to become bullish again; the cap is expected to rise to $113.4 million and most of the bad contracts Fan lists below, come off the books.

Fan Marino: NBA GMs had money burning holes in their pockets during the summers of 2016 and 2017. It’s the only reasonable explanation for the following contracts:

Every player on that list is making $70 million+ and not one of them made an all-star appearance in the 3 seasons prior to signing the deal or during the 2 seasons since. It’s not a coincidence that of those 14 players, not one plays on a team that remains in the playoffs.

Churchill Downs has partnered with Old Forester to create a race-day cocktail for Thurby, the Thursday before the Kentucky Derby (i.e. today). The Old Forester Perfect Old Fashioned will rival Churchill Downs’ other signature race-day mixed drinks, the mint julep and Lily; featured at the Kentucky Derby and Kentucky Oaks, respectively. A simplified version of the Louisville favorite will be served to race fans throughout the day; but, is limited to just Thursday’s event.

You don’t have to trek to Louisville today to sample CHDN’s version of the classic cocktail. Simply mix a 2 oz. of Old Forester 100 Proof Bourbon with .5 oz. of Old Forester Perfect Old Fashioned and serve it over ice. Just don’t forget to garnish your cocktail with an orange peel!

Howie Long-Short: On April 28th, Churchill Downs Incorporated (CHDN) reported Q1 ’18 financials; net revenue grew 13% YoY (to $189.3 million) with adjusted EBITDA up 36% YOY (to $49.2 million). CEO Bill Carstanjen attributed the growth to strong performance from the company’s casino and TwinSpires businesses. Casino adjusted EBITDA increased $9 million YoY, while TwinSpires’ adjusted EBITDA increased $3.3 million; as the company increased its handle to 20.2%, a significantly higher take than the balance of the thoroughbred industry (14%). CHDN shares are up 17% since April 13th, currently sitting at $274.80; just below their all-time high ($277.15).

Old Forester is a subsidiary of the Brown-Foreman (BF.B) Corporation, a publicly traded spirits and wine business; and component of the S&P 500. On March 7th, the company released its fiscal Q3 ’18 financials; a strong report that reflected net sales growth of +9% YoY (to $878 million), with operating income up +11% YoY (to $304 million). The company’s American whiskey brands, Old Forester and Woodford Reserve, each contributed double-digit underlying net sales gains during the quarter that ended on January 31st. BF.B’s Q318 results are comparable to net sales (+9% YoY to $2.5 billion) and operating income growth (+15% YoY to $894 million) over the first 9 months of the company’s fiscal 2018 year. The share price is up 42% over the last 12 mo., but has remained relatively flat YTD (-2%).

Fan Marino: The 144th running of the Kentucky Derby will take place on Saturday. Justify (3-1), Mendelssohn (5-1) and Magnum Moon (6-1) are the morning-line favorites in the field of 20. Justify, trained by Bob Baffert, will start from the No. 7 post. Should he win, he would break the “Opollo Curse”; becoming the first horse since 1882 to win the Derby (3-year olds) after not racing at all, as a 2-year old. Magnum Moon, trained by Todd Pletcher, is the only other horse in the race who can accomplish that feat; undefeated in 2018, he’ll start from the No. 16 post.

Fun Fact: Did you know that the University of Arizona has among the world’s most renowned Race Track Industry Programs? Established in 1973, the program offers 2 paths; business (race track management, regulation) and equine management (racing & breeding). Baffert and Pletcher are both proud graduates of the program.