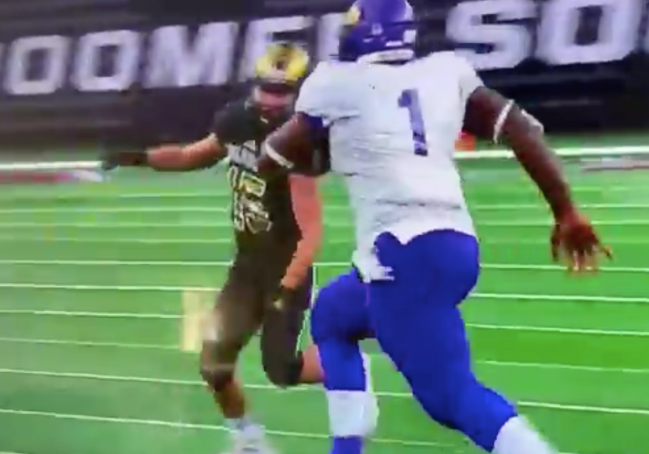 If you ever watched the former TV show Friday Night Tykes, which dived into the intensity and passion of youth football in the state of Texas, you’ve probably wondered where some of the kids featured on the show ended up. Similar to other football shows like QB1 and Last Chance U on Netflix, Friday Night Tykes had a few standout performers, and showed behind-the-scenes coverage of life off the gridiron.

One of the kids on the show was somebody named Doug Brooks, who, along with his brother Dalton, played for the Yoakum Outlawz youth football team during taping. And while he was just a runt back then, he’s turned into a damn beast today, with the kid growing up to be a devastating 260-pound junior fullback and defensive tackle for Shiner High School in Texas.

Recently playing against Post High School in the Texas Class 2A Title Game — which Shiner won 42-20 — Doug Brooks showed how much of a bulldozer he’s become, not only flashing his agility with an interception for a touchdown, but going full beast mode as a runner who treated opponents like dirt. Just look at the display put on by the former Friday Night Tykes star.

Uh, yeah, no thanks. I’m a 36-year-old man and wouldn’t want to get in the way of the runaway beer truck known as Doug Brooks. Sheesh, the way he just destroyed that poor defender might as well be assault, and sort of reminds me of LSU’s Dylan Moses’ younger brother, Keylan Moses, who’s still only in 8th grade and is an absolute tank.

For the game, the former Friday Night Tykes star had four tackles on defense, that interception, six carries for 65 yards as a fullback and, get this, even a 20-yard punt return — because, you know, having a 260-pounder is totally fair to have returning punts.

The junior Doug, who has a scholarship offer to Houston, wasn’t even the best of the two Brooks’ brothers in the Texas state title game, as Dalton actually captured the offensive MVP with his six carries, 55 yards and two touchdowns. With Doug Brooks having a 100-pound advantage over Dalton, here’s to hoping the former didn’t rub in the fact he got the individual accolade — because it’d probably end up poorly for him.

With another year of high school left, it’ll be interesting to see if Doug Brooks can improve even more, and if the bigger programs start to take notice of his skills. So while he’s best-known as the kid from Friday Night Tykes, he may just become a star on the next level if he keeps this kind of dominance up.