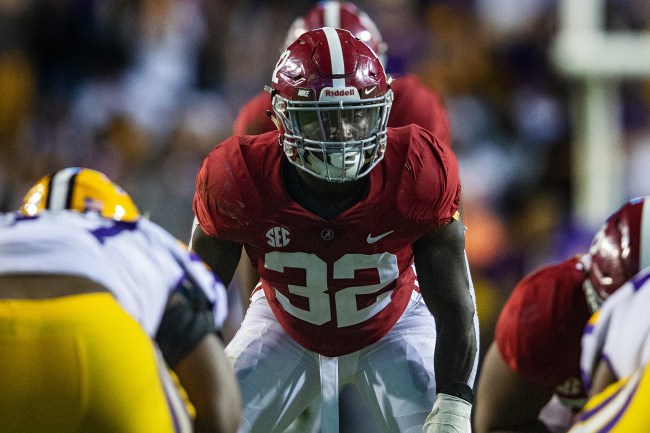 Unsurprisingly, the Alabama Crimson Tide football team is led by a defensive stud, with linebacker Dylan Moses helping guide the team to a No. 2 ranking in the current CFB rankings. Given the fact that Nick Saban has annually had Bama compete for national titles since he took over the program, is anyone really surprised that the Tide has looked like a minor league NFL team to this point? Absolutely not.

As for Moses, the kid is a stud, and, after an injury prematurely ended his season in 2019, the linebacker is back and projected to be a first-round pick in the 2021 NFL Draft. Again, nobody should be all that shocked by this, as Moses was featured in one high school hype video being compared to LeBron James, Ray Lewis and Bo Jackson back in 2015. Guys, he was a teenager at the time, so that’s a tough bill to fill — yet he’s done his best to live up to the hype.

But here’s the thing: Dylan Moses might not even be the best athlete in his family.

Since the Internet is a glorious place and we get to see high school kids who are talented AF at playing a sport bully other high school kids who are less talented and/or have not yet fully developed physically, we get videos like Dylan Moses’ 8th grade brother, Keylan Moses, who, by my eye test, sure looks like he could run over some pathetic NFL player on the football field. Take a look below at the video of Keylan, a running back who looks like a damn football god compared to the weak-ass kids he’s going up against.

Dylan Moses’ brother in 8th grade is a problem. pic.twitter.com/ybCwImbnTx

Like, no joke, early on in the video I thought to myself, “Wait, this is it? Keylan Moses looks slow. He looks uncoordinated. He looks… ohhhh, there it is, the kid has jets and is about six inches taller than any other poor soul standing on that football field with him.” I suddenly understood it: Dylan Moses’ younger brother is a beast.

You can’t watch that video and not be impressed by Keylan Moses. No way, no how. The stiff-arm he delivers to the scrawny runt at the 19-second mark really hits differently. It’s Adrian Peterson at Oklahoma kind of power, blended with (dare I say?) a young Herschel Walker’s blend of speed and bruising style. If I’m a college coach, I’m putting a mask on my face and headed to this kid’s games stat! This is a middle schooler doing this, and I’d sure as hell want to make sure I offer him a scholarship before anybody else does.

Then again, something tells me Keylan will end up playing for Dylan Moses’ soon-to-be alma mater and end up in Tuscaloosa in five years. If that’s the case, watch out, because I’m calling it now: At least one Heisman Trophy and a guaranteed first round pick in the NFL Draft. Remember, nature versus nurture, nature always wins.

So, yeah, watch the hell out for Keylan Moses, because he’s going to be a serious problem anytime he’s on a football field for the next couple of decades, guys.