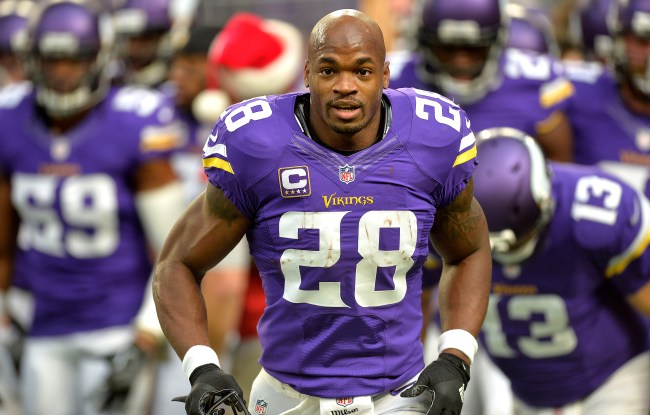 Current Washington Redskins running back Adrian Peterson is notoriously known among NFL players to have one of the strongest handshakes in the league, and he isn’t afraid to prove it, especially before games when the captains of the two teams meet for the coin toss.

Pat McAfee, who attended several of those meetings at midfield as a captain for the Indianapolis Colts during his playing days, recently shared a couple of stories about what goes on during those captain’s meetings.

The first story he shared was about the time Kyle Vanden Bosch was playing for the Lions and showed up to the meeting with red contacts in his eyes and McAfee spent the entire time, through the coin toss and everything, staring at him.

McAfee also talked about a game against the Vikings when he went out for the coin toss and standing across from him was Peterson.

Embed from Getty Images
“So he’s like kind of casually shaking everybody else’s hands. I’m like dapping everybody up like slow and I’m like watching them the entire time and he brings his hand out and I race in to get the netting and your thumb on the thumb, and then I squeeze first right, so I get like, that’s like an armrest when you get the angle on, so he squeezes back and I give him like a ‘Ha-Ha’ so while the coin toss is happening Adrian Peterson looks at me while I stand on the other side, neither of us were speaking captains, and he goes, “After the coin toss we’re doing another one.’ It was beautiful, absolutely beautiful!

“He goes back as soon as the coin toss is over there’s another dap up before he run back and we did this handshake. He got me around – that was my drop hand too – that was my punt drop hand and I thought it was going to be broke. But I was like those coin toss things, I don’t know how you don’t shake hands, because it’s just an awkward situation where you’re forced to shake hands almost.”

Listen to McAfee tell the story himself below. It’s far better that way.