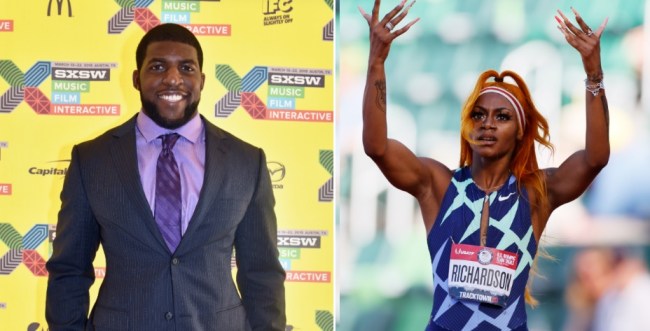 FS1 host Emmanuel Acho may have had the worst take on the Sha’Carri Richardson situation and the Internet immediately crushed him for it.

On Thursday night, it was revealed that Richardson would not be able to compete at the Tokyo Olympics in the 100m race after she tested positive for marijuana and received a 30 day suspension.

Richardson took responsibility for the suspension and revealed that she ingested marijuana after learning about the death of her biological mother during the Olympic trials.

While debating whether or not she should have been suspended, Acho delivered a bizarre take on the situation.

Legalizing weed in track and field competition is all good if you’re running in a straight line.

Legalizing weed in track and field competition is terribly dangerous if you throw the javelin.

Where do we draw line.

Acho’s take didn’t go over well on the Internet.

Right. Because someone may spark a blunt right before they pick up a javelin. And then murder someone due to wild, weed-induced inaccuracy. https://t.co/4Q0q335JX4

Nobody is competing high but methinks someone is tweeting high 🤣 https://t.co/AwzZeKT9RV

Are you saying that someone is going to get high and kill someone with a Javelin? If so, Do you have ANY IDEA how fucking hilarious you saying that is. REFER MADNESS! 😂😂😂😂😂😂😂😂😂😂 https://t.co/XxMi3KfAit

This some corny ass shit https://t.co/pv6hSTLW3h

Very dangerous. Just look what happened at the last Olympics, a very real phenomenon that happens all the time: https://t.co/Hij2Ghz2xG pic.twitter.com/xffk06AlW7

laughing hysterically imagining someone getting impaled with a javelin thrown by a stoned person https://t.co/MfjwSYF57R

I would actually love to watch Stoner Sports. https://t.co/rbKZ0eq6ur