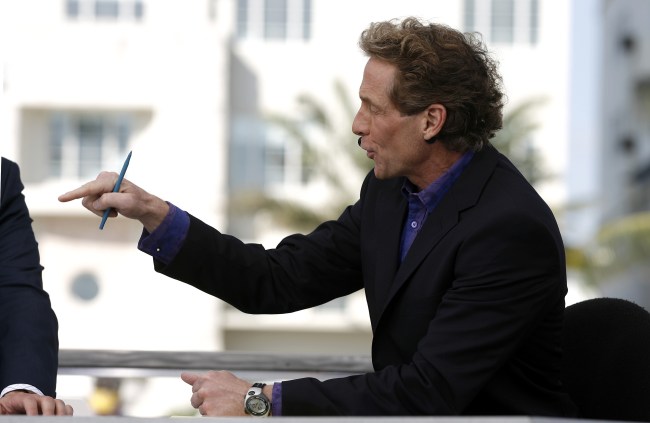 Last night NBA Twitter exploded when it was reported that Chris Paul had demanded a trade from the Houston Rockets because he couldn’t stand playing next to James Harden.

“There’s no respect at all, on either side,” a source told Yahoo Sports. “They need to get away from one another. Chris doesn’t respect James’ standing in the league, and James doesn’t respect the work Chris has put in to this point.”

Chris Paul has gone on to deny the report via Instagram and through the media.

Chris Paul's reply to the @VinceGoodwill report: "Damn! That's news to me…" pic.twitter.com/ndX7zxIDOe

Despite Paul’s denials, the Rockets situation was the subject of plenty of conversations during the early morning sports programming like First Take and Undisputed

Skip Bayless really fell for a fake @SportsTalkBarry report about Chris Paul making James Harden cry after he CP3 made fun of his manboobs..
LOOOOOOOOOOOOOOOOL pic.twitter.com/xzLTFpzETG

Here is the Tweet that Bayless used as his source.

Sources tell ESPN that Chris Paul repeatedly made fun of James Harden for having "manboobs" during practices over the last 2 seasons. Several times Harden broke down into tears and had to leave the practice facility. No surprise to see Harden wanting Paul out now.

Skip wasn’t the only one to fall for the fake report, several reported on Twitter also got duped by SportsTalkBarry.

Skip might have to retire from TV after that embarrassing mistake.