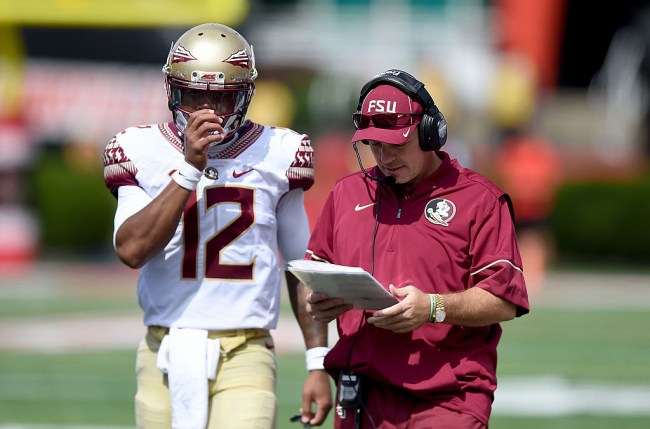 The Jimbo Fisher era at FSU is officially. This afternoon the longtime FSU coach told the media that he was not going to coach the team’s final game and was leaving for Texas A&M effective immediately.

Fisher won’t coach in the Seminoles’ game against Louisiana-Monroe on Saturday. The team will be coached by associate head coach and defensive tackles coach Odell Haggins.

“Coach Fisher did an exceptional job as both an assistant coach at FSU and in the challenging role of successor to the legendary Bobby Bowden,” Florida State president John Thrasher said in a statement. “I believe Texas A&M is getting one of the best coaches in college football.”

Fisher, 52, had hoped to wait to announce his decision until after Saturday’s regular-season finale, which the Seminoles (5-6, 3-5 ACC) need to win to extend their streak of 35 consecutive bowl games. The game was postponed from Sept. 9 and rescheduled to Saturday because of Hurricane Irma.

It seems like FSU QB Deondre Francois was caught off guard by Jimbo’s departure because he blasted his now former coach on Twitter for not giving him a heads up.

No call, no text, you could of said something …

It appears that Jimbo was probably going to address the team after their final game on Saturday but the administration forced him to decide on whether or not he was taken the A&M job sooner than he wanted to.