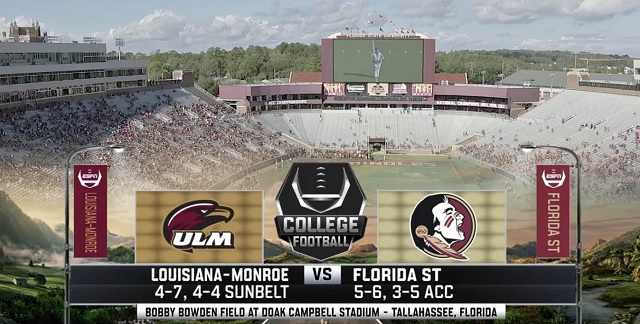 Oh how the mighty have fallen. Yesterday afternoon, longtime FSU coach Jimbo Fisher announced that he was not coaching the team’s final home game of the season after taking the head coaching job over at Texas A&M.

Fisher won’t coach in the Seminoles’ game against Louisiana-Monroe on Saturday. The team will be coached by associate head coach and defensive tackles coach Odell Haggins.

“Coach Fisher did an exceptional job as both an assistant coach at FSU and in the challenging role of successor to the legendary Bobby Bowden,” Florida State president John Thrasher said in a statement. “I believe Texas A&M is getting one of the best coaches in college football.”

Fisher, 52, had hoped to wait to announce his decision until after Saturday’s regular-season finale, which the Seminoles (5-6, 3-5 ACC) need to win to extend their streak of 35 consecutive bowl games. The game was postponed from Sept. 9 and rescheduled to Saturday because of Hurricane Irma.

Apparently FSU fans can give two shits about their game on Saturday against ULM because Doak Campbell Stadium was pretty fucking empty.

The look at Doak today is as expected pic.twitter.com/QnUOLx7VP7

A look at Doak with about 4 minutes remaining in the first half. pic.twitter.com/pb0biYmb5P

Here’s the tailgating scene from the top of Doak. #Noles pic.twitter.com/p98XqO2ZNX

What a weird week but I’m in Doak and it’s all somehow okay pic.twitter.com/nZDJFT9bMs

Ok #FSU fans. You decide. Half empty or half full? pic.twitter.com/e8onwFd2mu

These seats are pretty good though
(Good shot of how empty Doak is lmfao) pic.twitter.com/VmyM16VpgQ

Can’t blame the fans, no one is watching this ULM-FSU game this week.