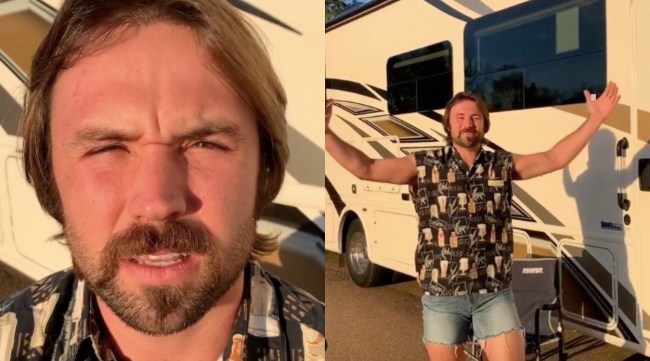 In a year full of twists, turns, and shocking moments (Antonio Brown’s slipping grasp on reality, the end of the Patriots’ evil empire, Lamar Jackson’s unprecedented dominance, etc) perhaps the biggest surprise to come out of the 2019 NFL season was the performance of Jacksonville Jaguars rookie quarterback Gardner Minshew.

During a revelatory rookie season that saw the 6th-round draft pick out of Washington State play in 14 regular-season games, Minshew completed 60.6% of his passes for 3,271 yards, 21 touchdowns, and just six interceptions.

Now, thanks to that out-of-the-blue productive rookie year, Minshew has set himself up with a chance to be the Jaguars full-time starting quarterback next season. But first, he’s going to spend his offseason doing perhaps the most Gardner Minshew thing possible: traveling across the country in a recreational vehicle.

Taking to Instagram on Monday, the homemade jorts-clad Minshew announced that we will be driving from Jacksonville, Florida to Los Angeles, California in his brand new RV and asked for his fans to hook up him up with “places to see, anything for free, food to eat, and people to meet.”

While Minshew was already something of a cult hero prior to his road trip announcement, this is just another example that the eccentric QB may be unlike any we’ve seen in recent years, because at this point, it’s virtually impossible not to like Gardner Minshew, no matter who you root for.