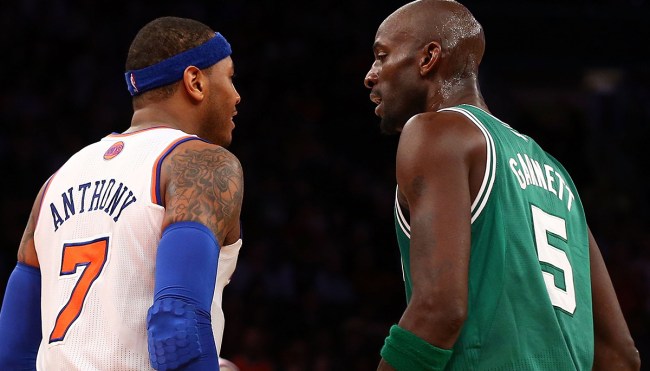 You can’t have a conversation about the best trash-talkers in NBA history without bringing up Kevin Garnett, a man who was never particularly concerned with crossing the line he routinely catapulted over in an attempt to get under the skin and in the head of his opponents.

After all, we’re talking about a guy who taught Joakim Noah a brutal lesson about why you should never meet your idols, compared Charlie Villanueva to a cancer patient, and went out of his way to bring up Tim Duncan’s dead mother on Mother’s Day. However, I’d be remiss if I didn’t also mention a rumor that’s swirled for years concerning what unfolded during a particularly chipper game between the Celtics and the Knicks in 2013.

After the two men got increasingly physical over the course of a few possession in the fourth quarter, things eventually hit a boiling point that was allegedly reached when Garnett told Anthony “your wife tastes like Honey Nut Cheerios.”

Anthony’s (now-ex) wife La La would debunk that rumor in a book she published the following year, and in a recent interview with GQ, Garnett did the same when he finally addressed the infamous incident, saying:

Based on what we know about the comment he made concerning Duncan’s mother, that first part might not be true, but when you consider both Garnett and the person he allegedly invoked have denied the Honey Nut Cheerios comment was uttered, it seems like we can safely assume it never was.