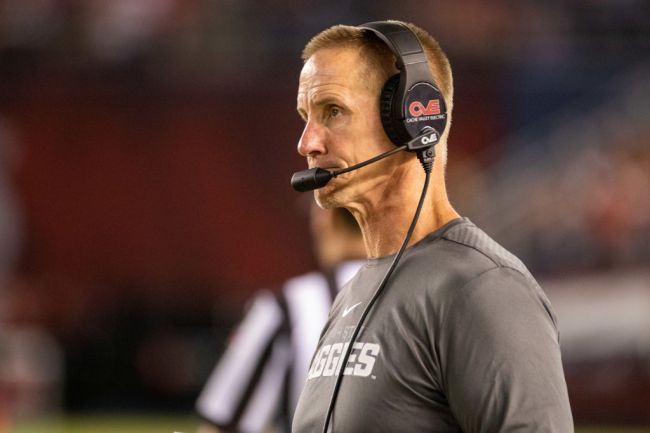 In today’s college football world, when a coach is fired, most fans’ first question is ‘how big is the buyout?’ The buyout has become synonymous with college football as contracts continue to get more and more preposterous each and every year.

Universities are basically forced to guarantee massive amounts of money to coaches in contract extensions to keep them both happy and to avoid a situation where they bolt for a different job. This means that if the coach is fired, they’re then owed a certain amount of their remaining contract. Universities literally pay coaches, usually over a number of years, to not be their head coach while simultaneously paying the new coach they hired.

South Carolina, Tennessee, Texas, and Auburn are just a few programs that are now on the hook to pay their recently fired coaches millions and millions of dollars not to be on their sideline.

It’s odd to hear about anyone turning down money they’re owed and it’s extremely odd to hear about this happening among college coaches, but for Gary Andersen, it’s totally normal. You may not know who Andersen is, but you’ll soon find out that he’s a much better person than you and I.

Andersen was fired as Utah State’s head coach after the Aggies got off to an 0-3 start. He had three more years left on his contract he signed in 2018 that was to see him make $900,000 per year. This means Utah State owes Andersen $2.7 million, but he’s refusing to accept it.

According to Deseret News, he actually signed a separation agreement with Utah State at the end of 2020 allowing the university to stop paying the remainder of his salary.

You may be thinking that refusing to accept almost $3 million you’re legally owed is absolutely crazy, but this isn’t the first time Andersen has done this. His refusal of Utah State’s buyout is just the latest move in trying to become the best person walking the planet.

Out of nowhere, Andersen stepped down as Oregon State’s head coach in the middle of the 2017 season. He had four years left on his contract and walked away from $12.6 million in that situation signing an agreement to free the Beavers from buying out the remainder of his contract.

For those keeping up, Andersen has refused to receive over $15 million he’s owed.

I tell you who does this, Gary freakin’ Andersen, who to no surprise is from Salt Lake City, Utah. This may just be the most Utah-man story in Utah-man story history.

Good for him though. Andersen didn’t fulfill his job needs and expectations at Utah State or Oregon State and didn’t see why he was owed money that was tied to him and his future at the schools. Seeing as how he had no future, he didn’t see the point of making the universities suffer in writing him a number of very large checks.

Andersen told Deseret News that he doesn’t plan to coach again, but instead – get this – plans to “do some camps and work with youth.”