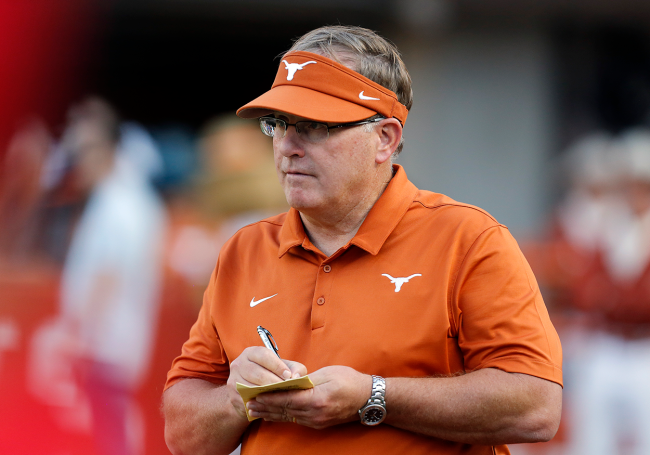 Seeing Gary Patterson wear Texas’ burnt orange is a strange sight, even after almost four full months. He took the field with the Longhorns in front of fans for the first time over the weekend and it was still impossible to comprehend.

However, a photo of his entrance has since gone viral and a hilarious conspiracy theory about the picture makes things make more sense.

Patterson, 62, received his first Power 5 conference coaching job in 1998 when he took over as the defensive coordinator at TCU. Two years later, he was named the head coach of the Horned Frogs.

From 2000 to 2021, Patterson served as the head football coach of Texas Christian University and spent his time competing against Texas both on the field and on the recruiting trail. Although not directly, TCU and Texas are rivals.

After more than two decades hating the Longhorns, Patterson was let go after last season. A few months later, he joined Steve Sarkisian’s staff in Austin as an analyst.

It was weird and seeing Patterson give the ‘Hook ‘Em’ hand signal was downright uncomfortable. Fortunately, on Saturday, it was the opposite.

As Gary Patterson walked into DKR Texas Memorial Stadium for the Texas spring game, he unintentionally threw ‘Horns Down.’

If you aren’t familiar with Horns Down, it’s pretty self-explanatory. Rather than throwing the ‘Hook ‘Em Horns’ right side up in favor of Texas, you throw it upside down.

There is a lot going on in the photo of Patterson on Saturday. His hand, of course, was not intentionally throwing Horns Down. It was an accidental thing.

But with that being said, the conspiracy theory that Patterson is actually a spy for TCU gained more ammunition. What if he is actually still working for the Horned Frogs and infiltrated Sarkisian’s staff to take down Texas from the inside out?! You never know…