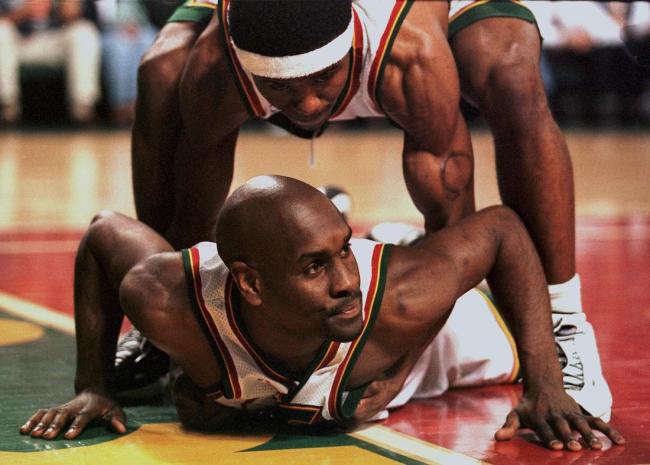 Basketball Hall of Famer Gary Payton wasn’t just a lockdown defender who made a living guarding the opposing team’s best scorer, but the man known as “The Glove” also happened to hold his own when it came to trash talk. Sure, there were a few instances where the former Seattle Sonics’ great got owned when running his mouth — like that time as a rookie going up against Michael Jordan — but, for the most part, Payton always got in to the heads of the opposition.

Unfortunately, given his competitive spirit and ability to trash-talk, Gary Payton also got himself into trouble a few times by saying the wrong things. One of those moments came during a locker room incident during halftime of a playoff game with his own teammate, Ricky Pierce, with both players reportedly saying they’d pull guns on one another to settle the dispute, with Payton even saying he’d kill Pierce’s family.

When the Sonics opened the 1994 playoffs against Denver with expectations of rolling to the finals, Payton overtly snapped.

“Three years ago I didn’t see the first outbreak, but he and Ricky Pierce got into some kind of a discussion at halftime of the first Denver game, and they were threatening to get guns,” Karl said. “The players told me they had guns in their bags. It was, ‘I’ll kill your family.’ It was crazy. That was Game 1, and we won.”

“There’s a lot of anger there, and a lot of stupid words are said,” Karl said. “So, the next day you’ve got to fix it. So, you’re fixing a lot. So, you’re putting the puzzle back together rather than building it.”

So, yeah, that’s some psycho talk from both Payton and Pierce, but, somehow, the two put the whole thing aside and moved on, even winning the playoff game during which it happened. This type of crap would be all over the news today thanks to social media, but, somehow, Karl and the Sonics kept it under wraps (for the most part, it seems).

Obviously, this type of trash-talk is a bit extreme in NBA locker rooms. Then again, we did see Gilbert Arenas and his former teammate, Javaris Crittenton, actually pull guns on one another years ago over a card game, so, who knows, maybe this whole threatening one another with a weapon is more standard than most NBA fans think?

There probably aren’t a lot of times Gary Payton regrets running his mouth while on the basketball court. But, something tells me he may feel a little embarrassed by this altercation with Ricky Pierce during their days with the Seattle Sonics. Thankfully, we didn’t have an Arenas-Crittenton situation on our hands back then.