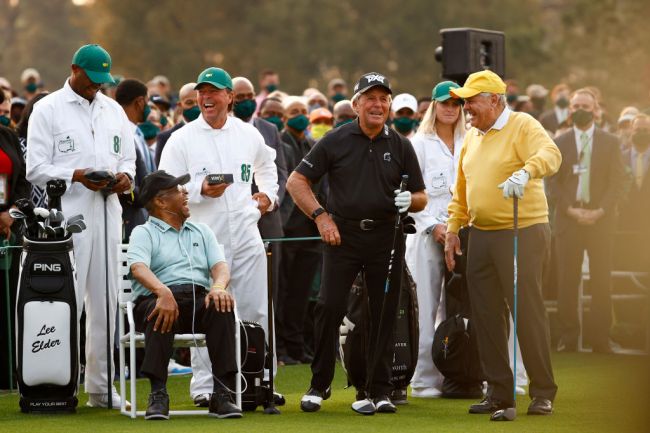 Gary Player has finally addressed the marketing stunt his son Wayne pulled during the opening tee ceremony of the 2021 Masters, which his other son, Marc, recently explained earned Wayne a permanent ban from Augusta National and the Masters.

To officially start the 2021 Masters, Lee Elder joined Jack Nicklaus and Gary Player on the first tee for the traditional ceremonial start. This was the first time Elder, the first African American to play in the Masters, was part of the ceremony. Positioning himself behind Elder, who was obviously going to get a lot of time on the broadcast, Wayne pulled out a sleeve of golf balls and held it where everyone could clearly see the logo throughout the ceremony.

Player addressed the moment and controversy surrounding it during an interview with WFAN explaining that it “wasn’t the most intelligent thing to do” but didn’t state that Wayne had officially received any sort of ban from Augusta National, at least not yet.

“I don’t think he did it with any malice,” Player said. “He was basically telling his friends, ‘My father will play this ball.’ And I think his friends didn’t believe it because it’s not a ball on the market…Augusta has done a lot of things that a lot of people don’t like, as well, throughout history. That’s their course, it’s their tournament. And you’ve got to abide by their rules. And if you don’t, you’re going to be asked to leave. We’ll see what their verdict is in the end. Whatever happens, so be it.”

Player took things even further in what was seemingly a defense of Wayne’s actions by claiming that Wayne and Elder are actually close friends.

It’s unknown whether Elder and Wayne truly are ‘dear friends’ despite their 28-year difference in age, but Gary is sticking to the story that the two talked over the phone and Elder essentially said no harm, no foul with the guerilla marketing stunt he pulled.

The elder Player made mention of Martin Luther King Jr. and Nelson Mandela during the interview as well while explaining that he too faced discrimination during his career.