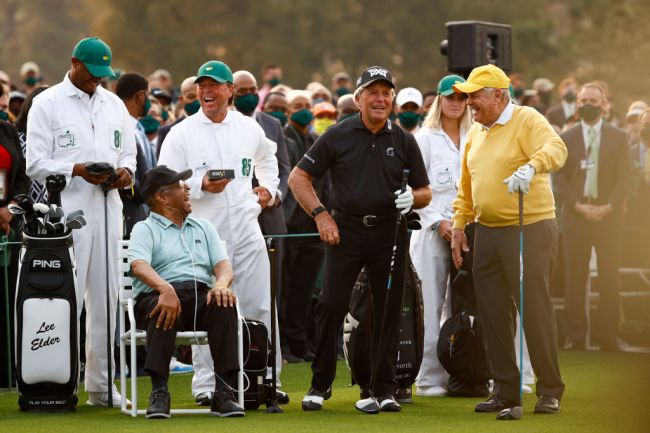 The contrast between how the 2021 Masters started and how it finished is honestly startling. It began with the son of one of the game’s legends hawking golf balls during a historic moment on the first tee and ended with Hideki Matsuyama becoming the first man from Japan to win a major championship.

On Thursday morning, Lee Elder joined Jack Nicklaus and Gary Player on the first tee for the traditional ceremonial start. It was the first time Elder, the first African American to play in the Masters, was part of the ceremony. It was a monumental moment for the game of golf that certainly meant a lot to a whole lot of people around the world. Player’s son, Wayne, saw this as a moment to promote some golf balls.

Positioning himself behind Elder, who was obviously going to get a lot of time on the broadcast, Wayne pulled out a sleeve of golf balls and held it where everyone could clearly see the label throughout the ceremony. You can see Wayne holding the sleeve of balls in the photo above.

After the ceremony, Wayne, who was arrested in January of 2019 in Georgia on fraud charges, told Golf Digest that he thought “it would be cool for fans to know what ball my dad was teeing off with.” No, Wayne, nobody cares what golf ball your father is hitting.

It turns out the stunt from Wayne got him banned from Augusta National and the Masters.

Marc Player, who is reportedly estranged from his brother Wayne, shared a tweet on Monday explaining the situation.

“Wayne has since correctly been banned from Augusta National and The Masters tournament,” Marc tweeted in response to CBS Sports’ Kyle Porter. “What a shame. What an embarrassment. What a bad decision to allow him on the first tee after years of similar shenanigans. My apologies to all.”

It’s unknown at this time whether or not his father knew Wayne was going to pull this stunt during the ceremony. Player has hit the Vero brand golf ball, the one Wayne was hawking behind Elder, for years. OnCore, the maker of the ball, disavowed Wayne’s actions in a statement.