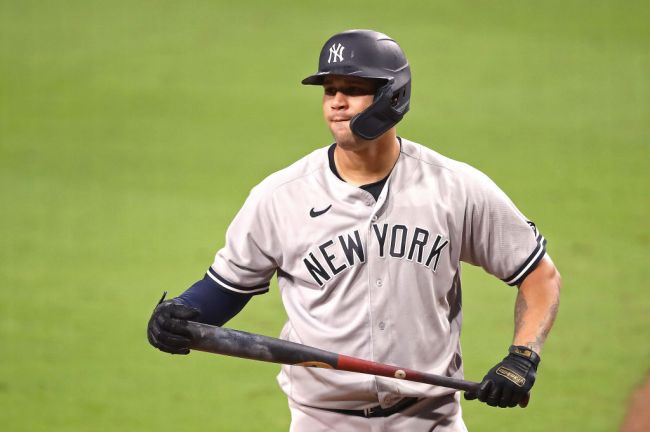 New York Yankees catcher Gary Sanchez may have been one of the only people who was thankful for a lack of fans during the 2020 MLB season. The 28-year-old slugger didn’t find much behind the plate and logged just 23 hits in 156 at-bats for a .147 batting average. Numbers like that are sure to have Yankee fans booing and calling for the organization to pack your bags and send you out of town, but the pinstripe faithful were not the only one who vouched for a change.

Late in the playoffs, manager Aaron Boone decided to bench Sanchez in favor of backup catcher Kyle Higashioka. The decision came as a bit of a surprise from a standpoint of name notoriety, but it was in the best interest of winning baseball games. Sanchez was disappointed with having to to ride the pine and stirred the pot even more this week by telling ESPN’s Marly Rivera that he was never told why he was benched.

“It was something that had never happened to me in my career, whether in the minors or in the majors,” he said. “When they benched me during the regular season, it was explained to me that I would catch one day and have a day off or catch two days and then have a day off to rest, (to) work on things.

As for the postseason, he expressed his confusion.

“Then the playoffs came along, and you start getting excited, and you have all that adrenaline,” Sanchez said. “I already felt I was in better form and I had so much desire to contribute to the team, to finally do something, which I did not do in the regular season. Feeling like I couldn’t contribute was very hard. I always kept supporting my team. But the reality is they never told me why I was benched. I didn’t know why I wasn’t playing.”

The 2021 season is more than four months away and whether Sanchez will start the year as the team’s starting catcher has yet to be announced. If he does get the nod, the potential for greatness is there. Sanchez slugged 34 home runs in the 2019 season, but was heavily scrutinized for his defense behind the plate. Only time will tell if the Yankees organization and its fans will be able to forgive him in time for the 2021 campaign, but maybe not having fans in the ballpark will play to Sanchez’s favor as he tries to regain his bat.