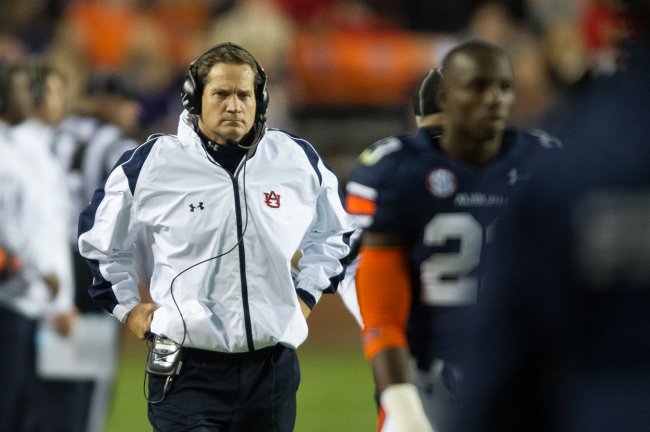 Gene Chizik spent three years as the head coach at the University of Auburn and made just under $20 million. All of that money came by exploiting the talent of college athletes who were not getting paid — at least, legally.

Now, nine years later, he had the audacity to bash a program for paying its athletes legally ahead of Early Signing Day.

Earlier this month, the University of Texas football program announced a massive plan to pay its offensive line. Each Longhorn offensive lineman on scholarship will receive $50,000 annually for use of their Name, Image and Likeness to support charitable causes.

The Early Signing Period opened on Monday and Texas has already inked the nation’s top offensive tackle and is in great position to land the top-ranked interior lineman. The NIL deal is working. Recruits want to play for a top program and will get paid $200,000 over four years in the process.

Chizik is not a fan.

The 59-year-old SEC Network analyst tweeted his thoughts about the Texas lineman fund on Tuesday night and it might be one of the worst takes of all-time.

To reiterate, Chizik was paid almost $20 million to coach four years at Auburn. And that does not include the salary from the other stops during his coaching career.

His buyout alone was about $8 million.

Using that number, it would take a Texas offensive lineman 160 years (!!) to make the amount of money that Chizik was paid to be unemployed based on the $50,000 a year deal.

With a $50,000 a year NIL deal, it would literally take any Texas OL recruit 160 YEARS to make the same 8 million that Auburn had to pay you in your buyout.

It gets even more ironic.

Cam Newton played at Auburn under Chizik. The Tigers came under heavy scrutiny in 2010 for its recruitment of Newton.

An individual purporting to represent Newton was allegedly soliciting a six-figure payment in exchange for his client’s commitment. That is a lot more than $50,000 a year.

College football players have been paid under the table for years, and likely under Chizik’s watch. But now it is legal.

And yet, here Chizik is, comparing offensive lineman getting paid to Americans struggling to feed their children. Ridiculous.

People had all kinds of jokes. Enjoy.

I’m with Gene. Any and all money should go to their daddies’ churches. https://t.co/bsdwvazcIP

Well technically for you the most money didn’t really have to do with wins https://t.co/qhUevdNMln

When someone exposes themselves for not knowing the system that put millions in their pocket https://t.co/ycGYxmLcWE

These mentions look like a Lincoln Riley brisket. https://t.co/GE0SQN1ChV

Someone is upset is severance package at Auburn didn’t include unlimited laser printing privileges https://t.co/NpbvQhNM28

You get paid to talk about these players but it’s an issue that they get paid for giving you something to talk about? https://t.co/Atedk1ijju

I would say Gene has a flawed understanding of labor but I didn’t get paid 7 mil because I lost to Vandy so maybe it’s me 🤷‍♀️ https://t.co/WZqykRhH6q

What’s next a lady ghostbuster!? https://t.co/9wtrVz2QhI

Which of the 11 bedrooms did you tweet this from https://t.co/j7OeB5Dc57 pic.twitter.com/39pQvRoRVq